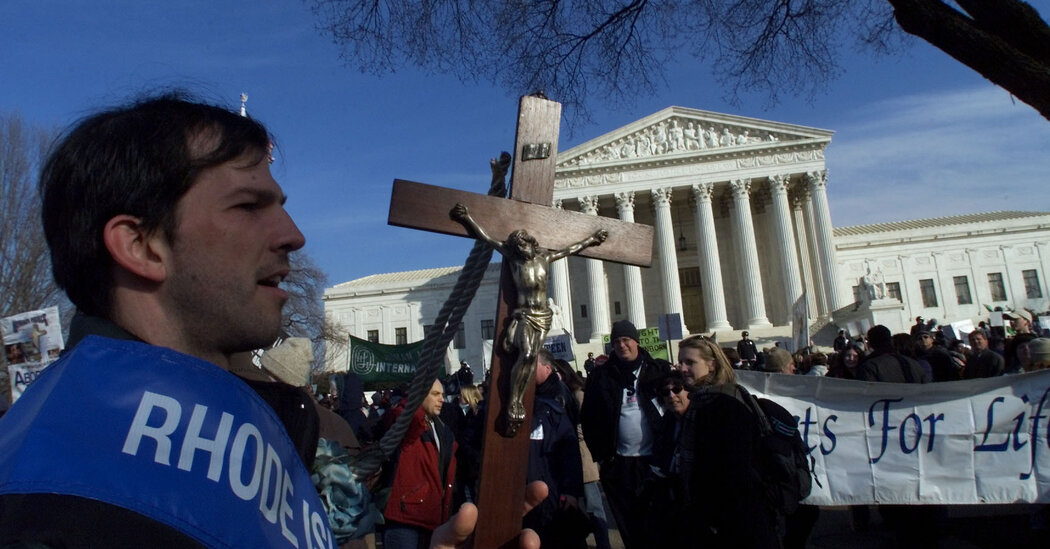 As the Supreme Court reconsiders Roe v. Wade months shy of its 50th anniversary, and likely prepares to overturn it, according to a leaked draft opinion, it is worth pondering how the ruling that established the constitutional right to abortion came to divide our country.

Conflict was not inevitable. If abortion is freighted with universal points of contention — religion and sex, gender and autonomy, life and death — it has divided no country as it has the United States. And by 1975, two years after the 7-2 decision was announced, Roe had engendered so little pushback that John Paul Stevens, the first judge appointed to the high court after the ruling, was not even asked his opinion of it during his confirmation hearing.

It is far too simple to attribute all of the divisiveness over abortion in this country, as some do, to our having established our abortion policy through courts rather than legislation. Leaders on both sides of the issue have sought to politicize the matter for political benefit, drawing on strains of the American character — our individualism and feminism, our religiosity and conservative attitudes toward sex.

As a result, we now find ourselves, a half-century after the Roe ruling, so divided by it that, as the feminist writer Katha Pollitt observed, “abortion qualifies as one of those subjects about which people have not only their own opinions but their own facts.” Indeed, in the United States, even the science of abortion is subject to debate. Does having an abortion cause a woman emotional hurt? At what point in a pregnancy does a fetus begin to feel pain? It depends largely on whom you ask.

To help understand how we got to this point, here is a list of 10 books — five that examine the legal, political and social foundations of abortion in America, followed by another five that explore all that abortion has encompassed since Roe: issues of violence and stigma, politics and race, medicine and law, philosophy and medicine.

‘Abortion in America: The Origins and Evolution of National Policy,’ by James C. Mohr

Rooted in the 19th century, this invaluable book is the foundational history of American anti-abortion laws. It examines how and why abortion was criminalized, which is essential to understanding the subsequent fight for its legalization.

‘Liberty and Sexuality: The Right to Privacy and the Making of Roe v. Wade,’ by David Garrow

Every movement needs its definitive history. And this big book offers both detail and scope as it methodically makes its way through the half-century fight for reproductive rights that culminated in Roe. The book is as rigorous as it is monumental.

‘Before Roe v. Wade: Voices That Shaped the Abortion Debate Before the Supreme Court’s Ruling,’ by Linda Greenhouse and Reva Siegel

Primary sources are crucial to understanding how history is made. This book presents the reader with a trove of original documents — among them letters, memorandums and legal briefs — that together informed the war over abortion that we know today.

‘Abortion & the Politics of Motherhood,’ by Kristin Luker

Roe was 11 years old when the author of this powerful book — a sociologist, not a legal historian — showed that the American abortion divide grew, most importantly, from distinctions of class. That observation has profound implications.

‘Defenders of the Unborn: The Pro-Life Movement before Roe v. Wade,’ by Daniel K. Williams

This book presents those who led the fight against Roe as they saw themselves, bound less by politics or religion than by values. Wonderfully balanced, the book is a reminder that abortion is a fraught subject for good reason.

‘After Roe: The Lost History of the Abortion Debate,’ by Mary Ziegler

This fair-minded yet hard-hitting book charts the descent of abortion politics into partisanship and rancor. The author, a law professor, is a pre-eminent expert on all things Roe.

This book humanizes the evangelical effort to end abortion, and charts its profound effect on the American culture wars. It is gripping history.

‘Abortion After Roe,’ by Johanna Schoen

This incisive book lays bare what providing abortion in America today means, and what it demands. It is a window into so much of what abortion touches upon, including gender and race.

‘Scarlet A: The Ethics, Law, and Politics of Ordinary Abortion,’ by Katie Watson

Written by a bioethicist and lawyer, this book introduces existing philosophical arguments for and against abortion. It is also a cleareyed examination of abortion as it most often is in the country — an act both ordinary and stigmatized.

‘What It Means to Be Human: The Case for the Body in Public Bioethics,’ by O. Carter Snead

With insight and provocation, Snead, a bioethicist, examines the questions that abortion raises about the meaning of human life.

Joshua Prager is the author of “The Family Roe: An American Story,” a dual biography of Roe v. Wade and its plaintiff, Jane Roe. Written over the course of a decade, the book tells the story of abortion in America through people, not politics.