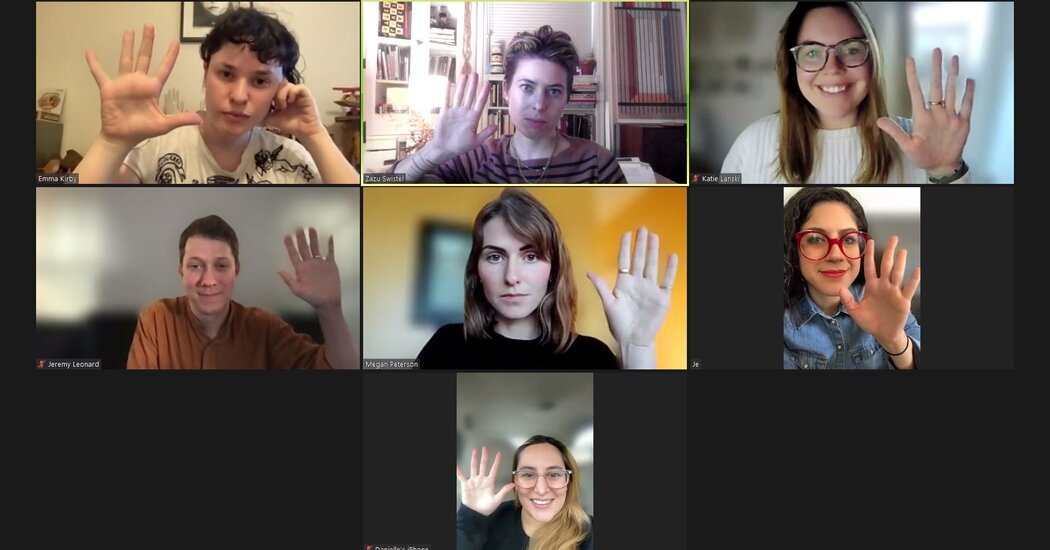 For decades, architects have enjoyed a place alongside doctors and lawyers among the professionals most revered by pop culture and future in-laws.

And for good reason. Architects spend years in school learning their craft, pass grueling licensing exams, put in long days at the office.

Still, there is one key difference between architecture and these other vocations: the pay. Even at prominent firms in large cities, few architects make more than $200,000 a year, according to the American Institute of Architects, which advocates for the profession. Most barely earn six figures, if that, a decade or more into their careers.

On Tuesday, employees at the well-regarded firm SHoP Architects said that they were seeking to change the formula of long hours for middling pay by taking a step that is nearly unheard-of in their field. They are seeking to unionize.

The organizers at SHoP, which has about 135 employees and is known for its work on the Barclays Center in Brooklyn and a luxury building south of Central Park previously called the Steinway tower, among other projects, said well over half their eligible colleagues had signed cards pledging support for the union.

They plan to affiliate with the International Association of Machinists and Aerospace Workers, and are asking for voluntary recognition of what would appear to be the only union at a prominent private-sector architecture firm in the country.

“Many of us feel pushed to the limits of our productivity and mental health,” the firm’s union backers, who call themselves Architectural Workers United, wrote in a letter to the firm’s leadership Monday. “SHoP is the firm that can begin to enact changes that will eventually ensure a more healthy and equitable future.”

Half a dozen SHoP employees said they worked about 50 hours a week on average, and often 60 to 70 hours when a key deadline loomed, usually every month or two. They said this was common even among more junior architects and designers who make $50,000 to $80,000 a year — above what many in other fields make, but a strain for workers who typically accumulate tens of thousands of dollars in student debt.

“SHoP was founded to practice architecture differently and has always been interested in empowering and supporting our staff,” the firm said in a statement. The firm did not say whether it would recognize the union.

The nascent effort extends beyond a single employer. David DiMaria, an organizer for the machinists union, said he had talked with architects who were in the process of organizing at two other prominent New York firms, which he declined to identify.

And those campaigns appear to reflect a rising interest in unionizing among professionals of all kinds. Tech workers, doctors, journalists and academics have all turned to unions over the past decade amid such concerns as a loss of autonomy and control at work, stagnating wages and lower job security.

The squeeze can be especially pronounced in professions that offer large noneconomic benefits, whether a sense of mission at a nonprofit or the cultural cachet of working in book publishing or television production. Such businesses rely on a cadre of young employees who toil for meager wages and a chance to make it in a prestigious field.

“There’s all this stuff that makes us succumb to the ideology that architecture is a calling, not a career,” said Peggy Deamer, an emeritus professor at the Yale School of Architecture.

This mentality has often seduced architects to accept relatively low pay, added Professor Deamer, the founder of the Architecture Lobby, an advocacy group with about 300 members mostly in the United States.

As a practical matter, several architects said, their firms are often too willing to take on uncompensated work, making it harder to pay employees fairly.

Firms that specialize in customized designs, like SHoP, regularly spend weeks generating proposals for the competitions through which clients award contracts, and for which the firms receive little or no pay. And many firms propose fees that are too low to support adequate staffing, several experts in the field said.

“People lower their fees, and once you lower your fees — I don’t know if it’s a slippery slope, but it’s definitely a slope,” said Andrew Bernheimer, the principal at Bernheimer Architecture and an associate professor at the Parsons School of Design in New York.

Architects at SHoP and other firms said their employers typically resolved this contradiction through vast quantities of unpaid overtime.

Jennifer Siqueira, an architect who joined the firm in 2017 and was let go during a round of layoffs in November, repeatedly put in over 60 hours a week while working on plans for a residential building in 2020, she said.

“I’d work until midnight, have dinner in front of the computer,” Ms. Siqueira, who has been involved in the union effort, said of the hectic weeks. She was pregnant and had to “get up to go to the bathroom every 15 to 30 minutes.”

Jeremy Leonard, an architect who also joined the firm in 2017, said that he had planned to take time off in the summer of 2020 for an annual vacation with his family, but that a supervisor discouraged it because of an important deadline. Mr. Leonard’s solution was to take the trip but work the entire time.

“I holed up in a laundry room for 12 hours a day and emerged for an hour for dinner,” said Mr. Leonard, who is also involved in the union campaign.

A SHoP spokeswoman said the firm negotiates the highest fees the market will bear, and that it “walked away from several projects this year that we determined would not pay for adequate staffing.” She added that SHoP seeks to keep workers employed long-term rather than staff up for particular projects and lay people off when they end, as some competitors do.

Scot Teti, a senior manager at SHoP who started in a position held by some of the union supporters, lauded the open communication between workers and managers and worried that unionizing would inhibit it by introducing “a level of rigidity.”

The firm also said it had become 100 percent employee-owned this year, but equity shares have yet to be allocated and employees were skeptical that they would have much additional say in how the firm was managed.

The organizing campaign dates back to the fall of 2020, just after an earlier round of layoffs and as working remotely prompted employees to focus on how consuming their jobs were.

A few workers who had been holding weekly meetings on how to make SHoP more diverse pivoted to discussing unionization, which some had learned about through the Architecture Lobby.

Several employees said SHoP’s labor practices were better than the norm in the industry — for example, the firm pays interns. That they still felt so stressed, the workers said, reflected the depth of the industry’s problems.

OMA, a rival firm, recently raised hackles on social media for a job posting that included “No 9-5 mentality.” A former junior architect at the firm said in an interview that he had often left the office at 10 or 11 p.m., and sometimes after 3 a.m.

A spokeswoman said that OMA strove to ensure a healthy work-life balance but that “there is always room to improve.” The job ad was intended to appeal to applicants with creativity and passion, she said, adding that the company removed the phrase “when we saw that it was being interpreted as code for a requirement to work endless hours.”

Union backers at SHoP said they hoped to negotiate policies that might, for example, give workers an hour off after every two hours of overtime. (SHoP currently provides some compensatory time off, but employees say the amounts are small and inconsistent.)

This would require principals and managers to use overtime more judiciously. SHoP employees said principals often wanted several renderings when a few would suffice, or drawings that lay beyond the scope of their contract — like a landscape.

Under federal rules, employers must pay most salaried workers time and a half after 40 hours a week if the employees earn less than about $35,000 a year. They are generally supposed to pay overtime to professionals who make above that amount if the workers have little decision-making authority, a provision that labor groups say is frequently ignored.

Phillip Bernstein, an architecture professor at Yale, agreed that pay and hours were a major issue in the profession, but worried that unionizing would backfire. “I don’t think this effort will work, nor do I think it’s good for the profession in the long run,” he said by email.

Professor Bernstein cited the risk that rivals could undercut firms with higher labor costs when bidding for work.

But union supporters at SHoP argue that if enough firms follow suit, the unions could help lobby city or state lawmakers to impose rules governing fees and staffing to prevent such undercutting.

While long hours are common, firms that produce relatively standard building plans sometimes have more humane policies, many architects said. But sophisticated design firms often regard themselves as artistic enterprises as much as conventional businesses and can have fewer safeguards.

“We are an anomaly in the business world of architecture in that we don’t keep track of hours,” Billie Tsien, a founder of the roughly 35-person Tod Williams Billie Tsien Architects, known for its inventive designs on projects like the Obama Presidential Center in Chicago, said in an email. She added that employees took time off as needed and that most stayed a decade or longer.

Firms like SHoP and OMA are also known for doing imaginative work, but at a higher volume and for more commercial clients, giving them greater economic influence over the industry. Union supporters believe that puts them in a strong position to reshape workplace norms.

“We’re very innovative in a lot of our office work,” said Danielle Tellez, another SHoP employee involved the union effort. “This feels like an extension of our ambition to lead the industry, to innovate in the industry, but for our professional standards.”