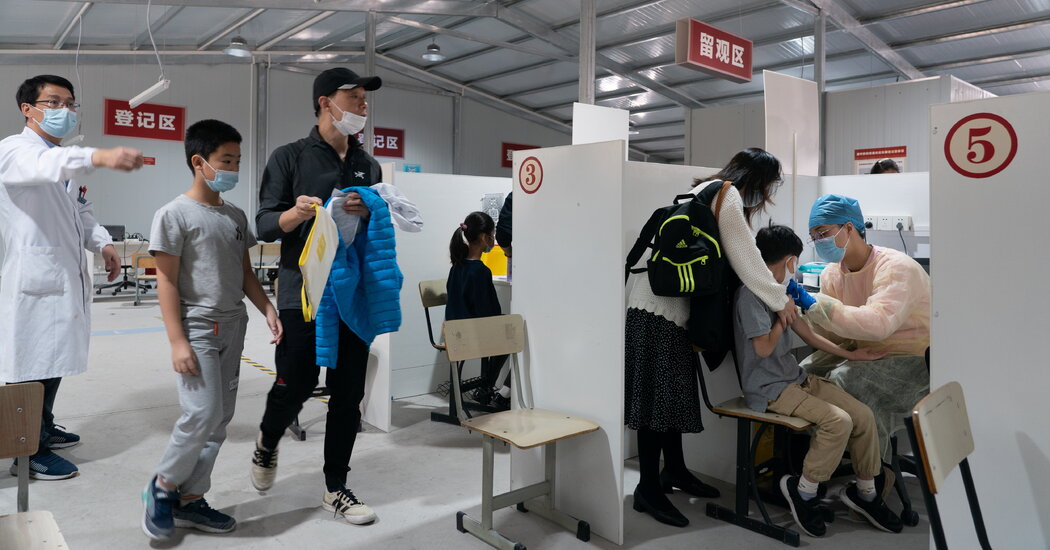 As the rest of the world struggles to vaccinate adults in the face of a threat from a new coronavirus variant, China has embarked on an ambitious campaign that it says will give the country better protection against Covid-19: full inoculation of 160 million of its youngest citizens by the end of the year.

The campaign — powered in part with red flower stickers, balloons and boxes of toys for children who step up to become what nurses call “little inoculated warriors”— has gotten off to a fast start. In the first two weeks of the effort, which began in late October, 84 million boys and girls between the ages of 3 and 11, about half of the eligible population, received the first of two shots, according to the most recent government data.

By contrast, in the United States, 2.6 million children between ages 5 and 11, or about 10 percent of the eligible population, received one dose over roughly the same time period.

The push is part of Beijing’s unrelenting march toward herd immunity, the point at which enough people are immune to the virus that it cannot spread through the population. With less than three months before the Winter Olympics in Beijing, Chinese officials are doubling down on that strategy. And with 1.1 billion adults already vaccinated, young people are seen as an important part of its success.

The campaign faces significant obstacles, including parental reluctance in a country with a checkered history of safety on children’s vaccines. The government insists that child inoculations are voluntary, but parents have described coming under pressure to get their children vaccinated.

When You Xun declined to have his 3-year-old son vaccinated in the city of Ningde, the boy was suddenly sent home from school. “Urgent notice! Urgent notice! Please, parents of all the babies who haven’t had the Covid vaccines, come to the kindergarten now to take your child home,” the message said.

Many parents rushed to have their sons and daughters inoculated, worried that they would not be allowed to attend school otherwise. Mr. You and his wife decided not to, fearing that the vaccine might not be safe for young people. After several days of silence from the kindergarten, he visited local authorities to complain about his son’s apparent expulsion.

Officials told him that there was no rule forbidding unvaccinated children to attend class. So Mr. You took his son back to school the next day. “From top to the bottom, it is a disguised pressure campaign to enforce vaccination,” he said.

Though Chinese vaccines are generally considered safe, the country also has a history of administering spoiled shots and guarding any information about negative incidents.

In a 2018 scandal, possibly hundreds of thousands of children were injected with ineffective vaccines for diphtheria, tetanus and whooping cough. And in 2013, 17 infants died after receiving a Chinese-made hepatitis B vaccine. While that vaccine has been widely used since, the authorities moved quickly to silence critics.

Get Ready for the 2022 Beijing Winter Olympics

Just a few months after Tokyo, the Olympics will start again in Beijing on Feb. 4. Here is what you need to know:

Herd immunity is a goal most countries have abandoned — particularly with the emergence of new variants such as Omicron and Delta — but one that China has set as a prerequisite for reopening its borders.

“Their hope is that by increasing the vaccination rate, it will give them the confidence to open up in the future,” said Yanzhong Huang, director of the Center for Global Health Studies at Seton Hall University.

Getting there will be difficult, in part because the country’s vaccines appear to be less effective than their Western competitors. By relying solely on its current vaccines, “China is unlikely to build this herd immunity,” he said.

That has not stopped officials from working tirelessly to get vaccines into the arms of the country’s smallest citizens. Kindergarten teachers across the country have sent out personal appeals urging parents to “hurry up” and get their students vaccinated. “Please respond to the national call to guide your child to take the initiative and actively get vaccinated,” one education bureau wrote in a public letter to parents.

In the eastern city of Hangzhou, in the southern cities of Guangzhou and Shenzhen, and in Beijing, kindergartens have sent out notices in private chat groups with parents suggesting that vaccination is required, according to interviews and messages reviewed by The New York Times. The parents are often asked to answer publicly whether their children have received a shot. If the parents decline, they are asked to submit in writing the reason for not getting their child vaccinated.

Responding to a request for comment, officials at the education bureaus in Guangzhou and Ningde said vaccination for children ages 3 to 11 was not mandatory. An official at the Guangzhou office said no directive had been issued to prohibit children without vaccines from attending school.

In June, China approved the use of its Sinovac and Sinopharm vaccines in children between the ages of 3 and 17. But until late October, only children 12 and up were being given shots, with the exception of at-risk children who were younger.

Though limited data has been provided, the two vaccines were approved based on Phase 1 and 2 trials showing them to be safe for children. The National Health Commission has said the safety and effectiveness of the Chinese vaccine for young children “does not differ significantly” from that for older children and adults.

Still, some parents are uneasy.

On Nov. 5, Nicolas Zhang got a message in the chat group he shares with other parents from his 5-year-old daughter’s kindergarten class in the southern city of Shenzhen. The school informed the parents that their children were required to get vaccinated, Mr. Zhang said. He and his wife, who are both vaccinated, hesitated.

“After massive vaccinations in our country, how many of them have had adverse reactions?” said Mr. Zhang, 35. “There is also no public media to do the follow-up, nor any government department to deal with it publicly.”

China is the world’s last zero-Covid holdout, and officials have shown no willingness to change course. Cities of millions of people continue to be locked down during minor outbreaks; tourist sites like Shanghai Disneyland have been shut down to carry out on-the-spot testing. People who lie about infections, hide symptoms or try to escape quarantine do so under threat of prison.

“This is about the collective force, so that if you don’t comply you will be left behind. Your kids will be looked down on by the community and their teachers,” said Bei Wu, a professor of global health at New York University and an expert in China’s public health policy.

Despite the lingering doubts of parents like Mr. You and Mr. Zhang, China will probably succeed in getting most of its youngest citizens inoculated by the end of the year. The authorities have galvanized nurses, doctors and community health workers to convince every parent that their child should roll up a sleeve not only for their own health, but for the good of the country.

The ruling Communist Party has pointed to the country’s low Covid-19 numbers — fewer than 5,000 people have died — as evidence that China’s authoritarian model is superior to the rest of the world, even as its borders remain closed and ordinary citizens find their personal freedom severely restricted during outbreaks.

“What we need is collective freedom, social freedom and national freedom,” Zhong Nanshan, China’s top disease expert, said. “Only with these freedoms can we have individual freedom.”