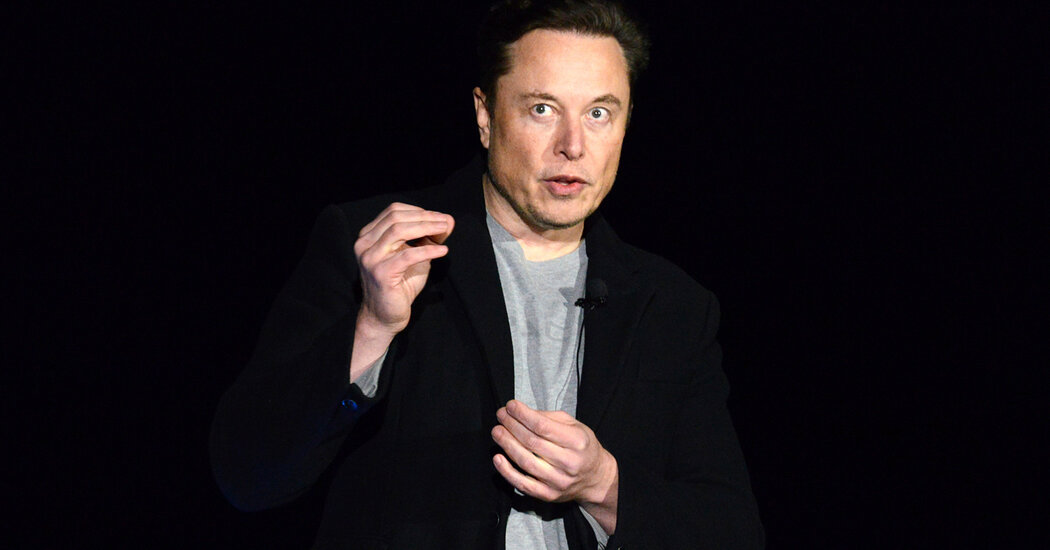 Elon Musk, the world’s richest man, reached out to Parag Agrawal, Twitter’s chief executive, a few weeks ago with a friendly heads-up. He was buying shares of the social media company, Mr. Musk confided, and wanted to discuss how to make Twitter better.

Mr. Musk had ideas for reshaping social networks that dovetailed with those of Mr. Agrawal and Jack Dorsey, Twitter’s co-founder, according to their public exchanges. All three have floated the notion of radically shifting the power in social networking to users and away from behemoth companies, by using an approach to technology that would give people control over what they see in their social media feeds.

In the ensuing weeks, Mr. Agrawal discussed having Mr. Musk become a more active participant in Twitter’s future, according to two people with knowledge of the conversations who were not authorized to speak publicly. Mr. Agrawal also welcomed having Mr. Musk — who has more than 80 million Twitter followers and sometimes tweets a dozen or more times a day — join the company’s board, one of the people said.

On Tuesday, Twitter announced that Mr. Musk, 50, would be appointed to its 11-person board in a term that expires in 2024. That followed the revelation on Monday that Mr. Musk had accumulated a 9.2 percent stake in Twitter, making him its biggest shareholder. Mr. Musk has agreed not to own more than 14.9 percent of Twitter’s stock or take over the company, which is based in San Francisco, according to a filing with the Securities and Exchange Commission.

“Through conversations with Elon in recent weeks, it became clear to us that he would bring great value to our board,” Mr. Agrawal tweeted on Tuesday.

The addition of one of Twitter’s most powerful users to its board has implications for a social network where world leaders, lawmakers, celebrities and more than 217 million users conduct their daily public discourse. Unlike some other Twitter board members, Mr. Musk did not sign an agreement that forbade him from influencing the company’s policies. That could allow him to work with Mr. Agrawal on a futuristic vision for “decentralized” social networking.

That vision challenges the way that platforms are created. Core technologies would be built publicly and transparently, with oversight and input from coders around the world. Users could then customize their social media feeds and establish their own rules about what kinds of speech are acceptable. That’s very different from how social networks like Facebook, Twitter and Instagram are now set up, with the companies dictating what posts can stay up and what should be removed.

The plan jibes with Mr. Musk’s, Mr. Dorsey’s and Mr. Agrawal’s beliefs in unfettered free speech. Mr. Musk has criticized Twitter for moderating its platform too restrictively and has said more speech should be allowed. Mr. Dorsey, too, grappled with the decision to boot former President Donald J. Trump off the service last year, saying he did not “celebrate or feel pride” in the move. Mr. Agrawal has said that public conversation provides an inherent good for society.

Their positions have increasingly become outliers in a global debate over free speech online, as more people have questioned whether too much free speech has enabled the spread of misinformation and divisive content.

A Twitter spokesman said Mr. Musk would not have a hand in policymaking at the company. Day-to-day policy decisions would still be made by Twitter employees, he said, and the company would be impartial in developing and enforcing its rules.

Mr. Musk could bring turbulence to Twitter. He has long used the service as a cudgel, trolling short-sellers of Tesla and insulting critics. He has also spread inaccurate information about the pandemic. After he mused about taking Tesla private in a tweet in 2018 and inaccurately claimed he had secured funding for the transaction, he was fined $40 million by the S.E.C.

His appointment to Twitter’s board was celebrated on Tuesday by some Republicans, who have accused the company of political bias and censoring right-wing voices. “Musk. Free speech,” said Representative Jim Jordan, a Republican of Ohio.

(Democrats, whom Mr. Musk has tangled with online over the party’s proposed wealth tax, were not vocal.)

David Kaye, a law professor at the University of California, Irvine, who formerly worked with the United Nations on speech issues, warned that Mr. Musk’s vision for free speech could conflict with Twitter’s policies, which are intended to govern conversations around the globe.

“The risk is that his individual and personal business preferences, which are sometimes idiosyncratic, are going to influence rule-making and enforcement in a way that is inappropriate for a company that, in his words, is a version of a public square,” he said.

Twitter’s move toward a “decentralized” social network is rooted in some of its top leaders’ unhappiness with how the platform has become an arbiter of what speech is allowed online and what is not. While Twitter’s users exercise some control over their social media feeds — such as by choosing the people they follow — the service’s algorithm picks what posts are seen at the top of their feeds and the company can decide whether to ban accounts based on whether posts have violated its policies.

Mr. Dorsey, who stepped down as Twitter’s chief executive in November, has said that users should have more power over which posts they see so they can make their own moderation choices. Last week, he lamented in a tweet that the centralization of the internet by corporations had damaged the web.

“I realize I’m partially to blame, and regret it,” he wrote.

In 2019, Mr. Dorsey financed a project called Bluesky, an effort to develop new infrastructure for social media that would give users control over their data, curating top tweets with their own algorithms and allowing them to move their data to other platforms.

“We believe that people should have choices about the key algorithms that affect their experience online,” Mr. Dorsey testified in Congress in 2020, calling the concept “an exciting, market-driven approach where people can choose what algorithms filter their content so they can have the experience they want.”

At the same time, Mr. Musk has dabbled in technologies for decentralizing control. In 2015, alongside the Silicon Valley entrepreneur Sam Altman and others, Mr. Musk founded an artificial intelligence lab called OpenAI, saying the company would openly share its research with the world at large. Mr. Musk later parted ways with the company.

Whether a decentralized Twitter could come together is unclear. It could take years to emerge because it would involve a complicated process of revamping the entire platform.

By March 14, Mr. Musk, who has a net worth of $270 billion-plus, had accumulated a more than 5 percent stake in Twitter, according to a company filing. After that, he began voicing more of his thoughts about Twitter and free speech on the service, including in exchanges with Mr. Dorsey.

“Twitter algorithm should be open source,” Mr. Musk tweeted on March 24, asking his followers to vote “yes” or “no” on the idea of making the code powering Twitter’s algorithm publicly available. Such “open” algorithms could give people more options for arranging their feeds as they wish and prioritizing different kinds of content.

Mr. Dorsey immediately agreed. “The choice of which algorithm to use (or not) should be open to everyone,” he tweeted in response.

On March 25, Mr. Musk asked his followers if Twitter was failing to adhere to free speech principles. “Free speech is essential to a functioning democracy. Do you believe Twitter rigorously adheres to this principle?” he asked.

“Is a new platform needed?” he added.

On Monday, in one of his first tweets after his stake was disclosed, Mr. Musk posted another Twitter poll asking people whether they wanted to be able to edit tweets, a feature that many have fruitlessly requested.

Mr. Agrawal jumped in, tweeting, “The consequences of this poll will be important. Please vote carefully.” The company later said it had been working on an edit feature since last year and would soon test it.

Mr. Dorsey weighed in on Tuesday after Mr. Musk’s appointment to Twitter’s board was official. The development made him “really happy,” he tweeted.