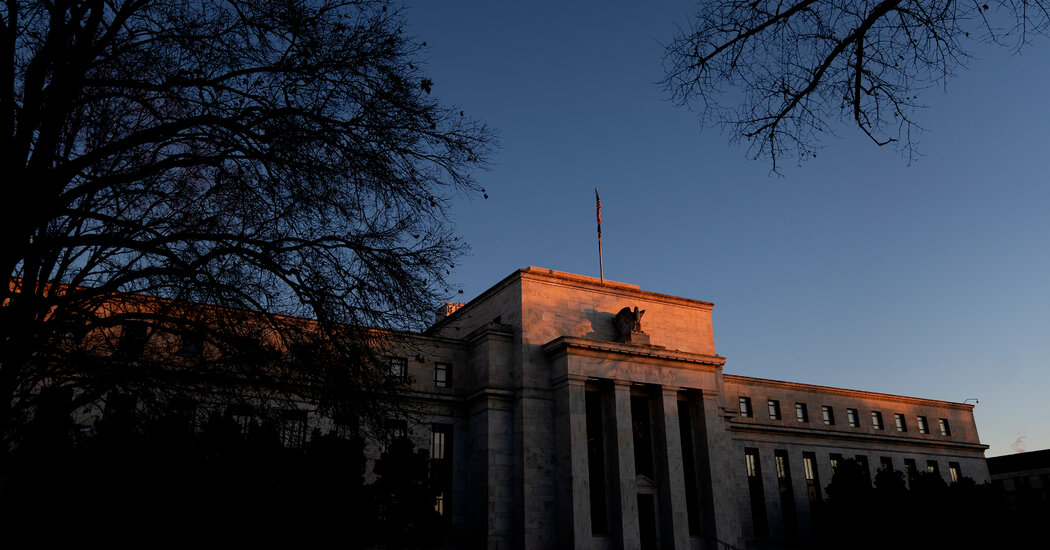 The Federal Reserve on Wednesday said it would “soon” be appropriate to raise interest rates, as inflation runs above policymakers’ preferred target and the job market strengthens.

Although central bankers left rates unchanged at near-zero — where they have been set since March 2020 — the revised statement after their two-day policy meeting laid the groundwork for higher borrowing costs as soon as the Fed’s next meeting in March.

“I would say that the committee is of a mind to raise the federal funds rate at the March meeting, assuming that the conditions are appropriate for doing so,” Jerome H. Powell, the Fed chair, said at a news conference following the meeting.

“The economy no longer needs sustained high levels” of monetary policy support, he said earlier in his remarks.

The Fed is already slowing a bond-buying program it had been using to bolster the economy, and officials left that program on track to end in March. Central bankers have signaled that they could begin to shrink their balance sheet holdings of government-backed debt soon after they begin to raise interest rates, a move that would further remove support from markets and the economy.

The Fed’s policy committee released a statement of principles for that process on Wednesday, setting out plans to “significantly” reduce its holdings “in a predictable manner” and “primarily” by adjusting how much it is reinvesting as assets expire.

“Inflation remains well above our longer-run goal of 2 percent,” Mr. Powell said. He said that problems pushing inflation up had been “larger and longer-lasting” than officials had expected and noted that the Fed was “attentive to the risk” that rapid wage growth could further fuel price gains.

Investors are nervously eyeing the Fed’s next steps, worried that its policy changes will hurt stock and other asset prices and rapidly slow down the economy. At the same time, consumer prices are rising at the fastest pace since 1982, eating away at household paychecks and posing a political liability for President Biden and Democrats. It is the Fed’s job to keep inflation under control and to help foster full employment.

Mr. Powell said that it was tough to guess what pace of rate increases would be appropriate, that it was important to be “humble and nimble” and that “we’re going to be led by the incoming data and the evolving outlook.”

The Fed’s withdrawal of policy support could cool off consumer and corporate demand as borrowing money to buy a car, a boat, a house or a business becomes more expensive. Slower demand could give strained supply chains room to catch up. By slowing down hiring, the Fed’s moves could also limit wage growth that might otherwise feed into prices.

“With inflation well above 2 percent and a strong labor market, the committee expects it will soon be appropriate to raise the target range for the federal funds rate,” the Fed said in its statement.

The Fed has pivoted away from providing full-blast support as the economy rebounds strongly from its pandemic shock, and the new signal of an impending rate increase is the latest step in that process.

“They’re reinforcing market expectations of a March liftoff,” said Priya Misra, head of global rates strategy at TD Securities. Ms. Misra said she viewed the Fed’s release of how it would approach reducing its balance sheet as a sign that the central bank could begin that next step in pulling back support very soon, perhaps after the central bank increases rates once or twice.

“They are trying, I think, to reduce market uncertainty around the balance sheet — but they’re telling us it’s happening,” she said.

Mr. Powell noted that both of the areas the Fed is responsible for — fostering price stability and maximum employment — were pushing the central bank to “move steadily away” from high levels of accommodation. He said that most committee members thought that the job market was consistent with maximum employment, defined as the level of employment that is possible without putting pressure on prices.

“There are many millions more job openings than there are unemployed people,” Mr. Powell said. “I think there’s quite a bit of room to raise interest rates without threatening the labor market.”

The unemployment rate has fallen to 3.9 percent, down from its peak of 14.7 percent at the worst economic point in the pandemic and near its February 2020 level of 3.5 percent. Wages are growing at the fastest pace in decades, though they are struggling to keep up with rapid price increases.

Inflation picked up sharply in 2021 and is likely to remain uncomfortably high well into 2022. The Fed’s preferred inflation gauge is expected to show that prices picked up by 5.8 percent in the year through December when the latest report is released on Friday, more than double the 2 percent pace the Fed aims for annually and on average.

Prices are high partly because global supply chains are struggling to produce and transport enough couches, cars and clothing to keep pace with booming demand for goods. The pandemic had changed consumption patterns, and households have money in their pockets thanks to long months at home and government relief.

By making it more expensive to buy a lawn mower on credit or a car with an auto loan, Fed rate increases might help to cool off America’s spending spree.

If the virus fades, that would also help things to get back to normal by allowing factories to operate at full speed without rolling shutdowns and by enabling consumers to spend their money on trips to the nail salon or the Alps instead of on new kitchen tables and garage renovations.

But Fed officials — and many economists — spent much of 2021 hoping that conditions would get back to normal and that inflation would go away on its own. That didn’t happen.

Central bankers have continued to estimate that the price pickup will fade substantially by late this year, but they have also guided policy into a position from which it can fight against any lasting inflation pressures.

Policymakers projected at their last meeting, in December, that they would raise interest rates three times this year. They did not release a fresh set of economic projections with this policy statement. The next quarterly estimates will come in March.