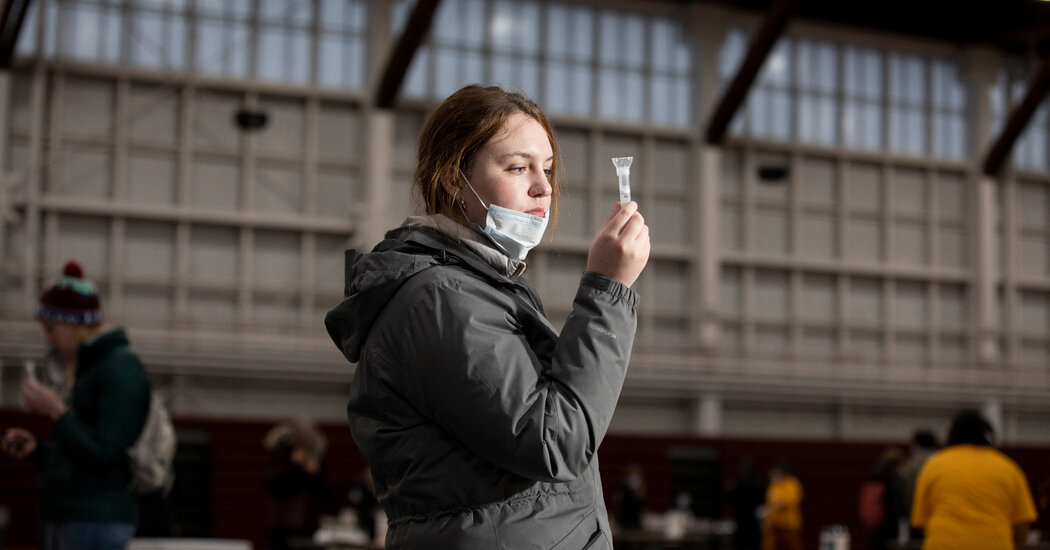 Saliva also has trade-offs. While the virus appears to build up in saliva early, the nose may be a better place to detect it later in the course of infection.

Researchers at the California Institute of Technology found that while the virus often spiked first in saliva, it ultimately rose to higher levels in the nose. Their results suggest that highly sensitive tests, like P.C.R. tests, may be able to pick up infections in saliva days earlier than they do in nasal swabs, but that less-sensitive tests, like antigen tests, might not.

The U.S. Covid response. Americans will be able to order free rapid tests online from the federal government beginning Jan. 19. The latest effort to ramp up access to testing comes as the public’s opinion of President Biden’s pandemic response is lower than ever, according to a new poll.

Around the world. Less than two days after Beijing reported its first Omicron case, China announced that it will halt Olympics ticket sales to the Chinese public. Foreigners were already barred from buying tickets to the 2022 Winter Games, which begin in less than a month.

The data on saliva are still mixed, some experts noted.

“There are these few studies that I have found really very interesting,” said Dr. Mary K. Hayden, an infectious disease doctor and clinical microbiologist at Rush University Medical Center in Chicago.

But Dr. Hayden said she was interpreting the new studies cautiously because “for years and years and years,” research has suggested that nasopharyngeal specimens are best for detecting respiratory viruses.

Some scientists also have practical concerns. The mouth is “a little more of an uncontrolled environment compared to the nasal passages,” said Joseph DeRisi, a biochemist at the University of California, San Francisco, who is a president of the Chan Zuckerberg Biohub and an author of the cheek swab paper. “Did you drink a Coke right before you took the test? The pH will be different. And those things matter.”

Saliva can be “viscous and difficult to work with,” especially when patients are sick and dehydrated, Dr. Marie-Louise Landry, director of the clinical virology laboratory at Yale New Haven Hospital, said in an email.

Ultimately, different approaches may be required in different circumstances. For people who have had symptoms for several days, nasal swabs might be a good choice, while saliva might be best suited for the large-scale surveillance screening of asymptomatic people, Dr. Hansen suggested. “We need to get the right test into the right places,” he said.