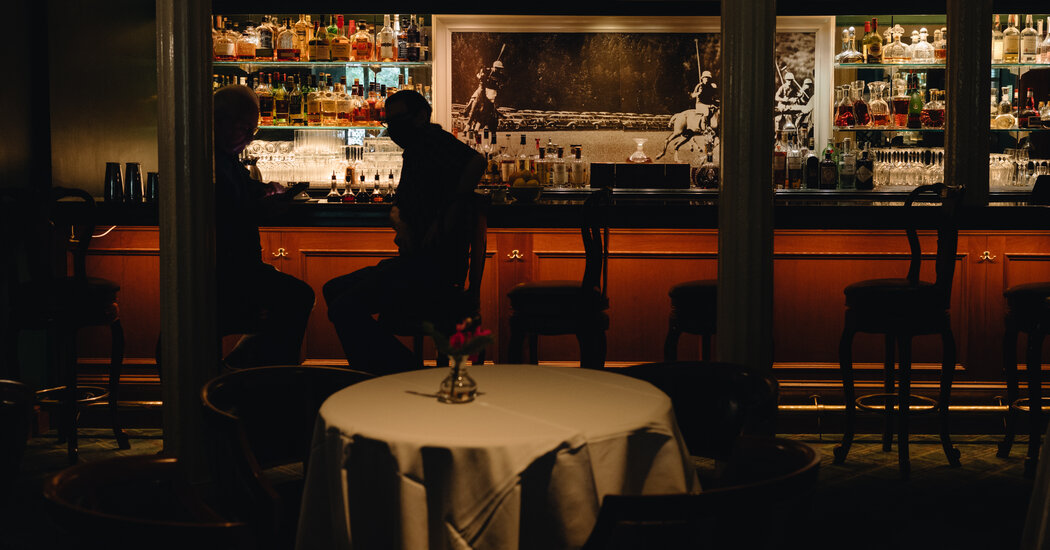 LOS ANGELES — Hollywood is down in the dumps. Oscar hopefuls like “King Richard,” “Nightmare Alley” and “West Side Story” have sputtered, and everyone knows that, studio spin aside, the Omicron variant is only partly to blame.

What about those stunning Spider-Man grosses? Sure, great, whatever — another superhero hit. It doesn’t change the fact that one storied studio, 20th Century Fox, vanished in 2019 and another, the venerable Warner Bros., is slashing theatrical output by almost half. Unless regulators do something unexpected, Amazon will soon swallow Metro-Goldwyn-Mayer. Streaming services are ending a moviegoing era.

“It’s over,” a glum film executive said at a holiday fete. “TV won.”

But there is at least one place where Hollywood feels undiminished. Step into the 88-year-old Polo Lounge — as a deluge of film V.I.P.s have done lately, defying a lingering boycott over its owner, the sultan of Brunei, and his enacting of Shariah law in his country — and return to a time when movies indisputably commanded the culture. Outside the Beverly Hills Hotel, which houses the Polo Lounge, change is washing through moviedom with terrifying speed. (Hollywood’s prize system, long a crucial promotional platform, is crumbling, with the near-abandonment of the Golden Globes on Sunday as only one example.) Inside the clubby Polo Lounge, however, very little has changed in decades.

It might as well be 1937, when Marlene Dietrich, wearing long gloves, could be seen dispassionately smoking a cigarette at the bar, her mink slung over a stool. “It’s one of the last surviving links to a time when movies still mattered,” said Terry Press, a former president of CBS Films and longtime patron.

What better place for Hollywood heavies to gather for what amounts to group therapy? And, perhaps, plot a counterattack.

Not long ago, Jimmy Fallon, dutifully wearing a face covering, stood next to the grand piano on a Friday night and belted out “Sweet Caroline.” Jennifer Lopez and Jennifer Lawrence have been spotted. Kim Kardashian and Pete Davidson dropped in for a bite the day after Christmas. Caitlyn Jenner had tried but was asked to leave for ignoring the dress code. (No “ripped denim.”)

As of early December, Polo Lounge revenue for the year was roughly 10 percent above the same period in 2019, according to Edward Mady, the hotel’s general manager. He added that the Polo Lounge had recently been receiving about 150 calls a day for reservations, with roughly 75 requesting one of nine patio booths.

In 2014, Mr. Katzenberg, Jay Leno, Ellen DeGeneres, Elton John and others led an entertainment-industry boycott of the property after its owner, the sultan of Brunei, imposed Shariah law in his country, making gay sex and adultery punishable by stoning. Hollywood mass-shunned the Polo Lounge, which was at first deserted and then bounced back as a popular spot for Beverly Hills Ladies Who Lunch. (“Betsy! Betsy!”)

By 2017, many luminaries had returned. The entertainment industry enjoys a public snubbing, but it also has a short attention span. President Trump, elected in 2016, prompted outrage on so many fronts in liberal Hollywood that remembering to be mad at the Polo Lounge was difficult.

And people wanted their salads. The most popular one at the Polo Lounge is the McCarthy, famous for its price ($44) and for being chopped so finely that one could almost drink it with a straw.

A-listers may have returned, but none were eager to be quoted in this article. An email to Mr. Katzenberg, for instance, was forwarded to a spokesman, who responded, “He is actually unreachable on vacation at the moment so won’t be able to participate.” Others declined because they did not want to make themselves a target for activists. Several cited the awkward optics — cooing over an ostentatious watering hole at a time when more studio layoffs are on the horizon.

Protesters have not given up. In 2019, George Clooney wrote an opinion piece calling for an expanded boycott. (He did not respond to a query on whether his position had changed.) In October, one of the most ardent proponents of a boycott, James Duke Mason, wrote a new letter to the sultan, Hassanal Bolkiah, demanding the revocation of his kingdom’s “draconian laws.”

“The boycott has been and still is firmly in place,” Mr. Mason said by phone. “It’s a matter of values. Is your McCarthy Salad really more important than human rights?” Mr. Mason added that he and several associates intend to redouble their campaign against the hotel and its sister Dorchester Collection properties in 2022. (Mr. Mason comes from a show business lineage; his parents are Belinda Carlisle and Morgan Mason, a former agent and producer.)

Dorchester Collection, the London-based hotel company owned by the Brunei Investment Agency, responded with a statement: “We operate autonomously and embrace our longstanding values of inclusivity and belonging.”

In some ways, the Polo Lounge is perfectly positioned for life during the pandemic. It has a large outdoor dining area adorned with Brazilian pepper trees, roses and magenta bougainvillea. Studio offices have been mostly closed since March 2020, so moguls who would normally conduct business meals on their lots have needed a place to go; many live within walking distance. Mr. Zaslav has been intermittently staying at the Beverly Hills Hotel; he is renovating a historic estate four blocks away.

The Los Angeles power-restaurant scene has also been shaken up. Chateau Marmont closed its restaurant to the public when the pandemic started. (It has also had boycott issues.) The Palm was sold, prompting the departure of its charismatic torchbearer, Bruce Bozzi. For some, the Peninsula still has the stench of Harvey Weinstein, who, his accusers said, used the cover of work meetings there to sexually harass and assault women.

Five Movies to Watch This Winter

San Vicente Bungalows, a red-hot private club that opened in 2019, has filled much of the gap. It is known for a diverse and young Hollywood clientele (and for its treacly maître d’hôtel, formerly of the Sunset Tower).

But the Polo Lounge still ranks. In mid-December, Mr. Robbins, who took over Paramount in September, was deep in a breakfast discussion with Hannah Minghella, a senior executive at J.J. Abrams’s production company. Mr. Lourd occupied a booth nearby, partly concealed by a wall of white poinsettias. The restaurant’s director, Pepe De Anda, who started at the Polo Lounge in 1986, tended to an important-looking woman wearing a head scarf at Table 6, a relatively secluded spot where Marilyn Monroe preferred to sit.

Hollywood has lost some of its glamour to budget cuts and corporate consolidation, not to mention the pandemic. But the Polo Lounge — where avocado toast runs $36 — oozes the same extravagance it did in, say, 1998, when 57 million people watched “Titanic” sweep the Academy Awards. (Last year, the Oscars attracted 10.4 million viewers, beneath “The National Dog Show.”)

Near the Polo Lounge hostess podium, menus have recently been on display from Christmas dinners in the distant past, when moguls and stars apparently washed down “creamed calf’s sweetbreads en casserole” with “frozen apple toddy.”

The present, of course, can’t be avoided entirely. At tables favored by film executives, there is eye rolling and nose upturning about Silicon Valley’s push into entertainment: Apple is spending how much on Martin Scorsese’s next film?

And barbarians await at the gate. TikTok creators and Instagram influencers have discovered that the hotel’s lawn makes an interesting backdrop.

Mr. Mady, the hotel’s general manager, tensed up when asked about the social media crowd. “We’re not proud of that,” he said. “We’re trying our best to curb it.”