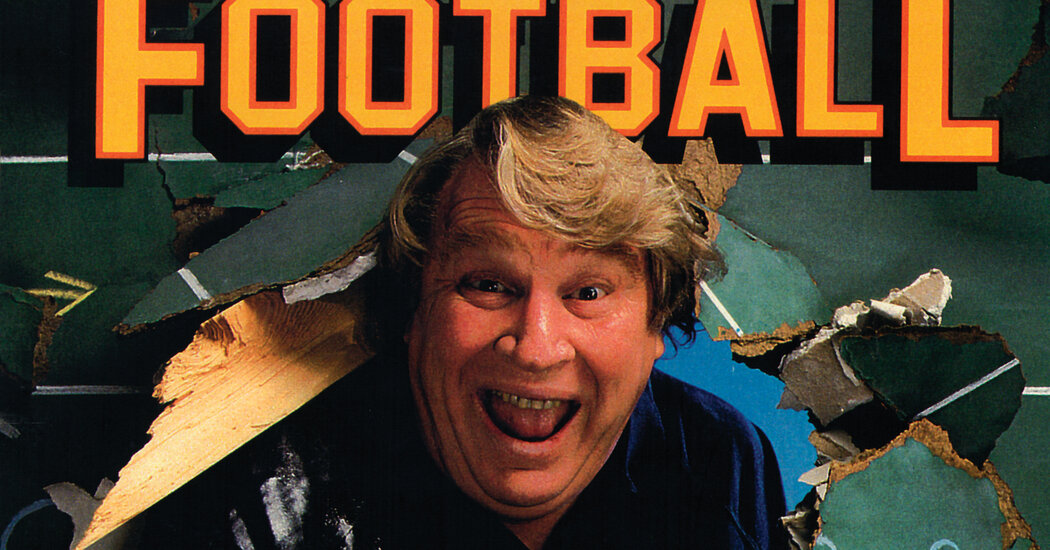 Trip Hawkins first met John Madden in the dining car of an Amtrak train traveling from Denver to Oakland, Calif., in 1984, after Madden had agreed to lend his name and football prowess to a football simulation video game. Madden, the legendary coach and broadcaster, quickly made it clear who would be calling the shots.

Because of the limits of computer processing power, Hawkins, who had founded the gaming company Electronic Arts two years earlier, floated the idea of a video game with seven-on-seven football, rather than the 11-on-11 version used in the N.F.L. Madden just stared at him, and said “that isn’t really football,” Hawkins recalled. He had to agree.

The extra years spent developing a more realistic game, which was called John Madden Football and debuted in 1988 for the Apple II computer, paid off. Decades later, the Madden NFL series of video games continues to sell millions of copies annually, has helped turn E.A. into one of the world’s most prominent gaming companies and has left a lasting mark on football fandom and the N.F.L.

Although he coached the Oakland Raiders to a Super Bowl victory and was lauded for his work as a television analyst, Madden, who died Tuesday at age 85, is better known to legions of younger sports fans as the namesake of the iconic video game franchise that has generated more than $7 billion in revenue.

“Every dorm room right now, every basement, every couch, there’s people sitting down playing Madden,” said Scott Cole, a longtime sports broadcaster who has called games for several years for the Madden Championship Series, the most competitive Madden NFL tournaments.

Madden was far more than a figurehead for the gaming franchise, which sold more than 130 million copies in its first 30 years through 2018, according to the company. For a decade Madden, not star athletes like Jerry Rice or Barry Sanders, graced the game’s covers. For early iterations of the game, he lent his broadcasting voice and spent days in a studio recording the color commentary to narrate the simulated games as players controlled their teams.

From the start, he insisted on realism, instructing developers on details as exacting as how a defensive player should be tackling and which stances linemen should use during certain formations.

The early interaction on the train — Madden had a lifelong fear of flying — showed Hawkins that Madden, despite being affable and entertaining, treated the development process seriously.

“Whatever John says is the final word. He had that kind of presence and the ability to be the commander,” Hawkins said. “It didn’t matter that I was running my company, he’s still going to tell me what to do,” he added with a laugh.

Rex Dickson, who was the creative director of Madden NFL from 2012 to 2018, said he and his team of developers would visit Madden each year at his football compound in Pleasanton, Calif., where he would grill E.A. on changes to the game and then sit down to watch football with them while eating breakfast burritos and ice cream sundaes.

Madden held court in a “gigantic man cave,” Dickson recalled, with televisions everywhere and Madden’s family members and former Raiders players popping in and out of the sprawling complex. Madden sat at the center of the room.

“He was definitely a larger-than-life character,” Dickson said, “but what I remember the most about him was how magnetic he was.”

The trip was a reward for stellar E.A. employees, but it could also be stressful, because Madden would interject during a presentation to explain why the game was implementing a mechanic incorrectly.

“He would not be afraid to stop you mid-pitch and question you on your football knowledge or ask you to validate why something was worth the investment, and you damn sure better have known what you were talking about,” Dickson said.

Donny Moore, who has worked on the game for E.A. for 20 years, recalled when Madden was presented with the first version of the game to include referees. “John’s first feedback was the referees are too close to the line of scrimmage,” Moore said. “It was something a football coach and analyst would spot right away. Game designers and video game people might not catch that the first time.”

Madden’s desire to make the game as accurate as possible came even as he realized the real sport he loved did not always match how other people made their own fun.

“I went crazy one time, in fact, when my son Joe and Michael Frank played,” Madden told Grantland in 2012. “They were on the bus, and the score was 98-96. Neither one of them ever punted. It would be like fourth-and-20, and they’d go for it. I was so pissed off. I said, ‘You’ve got to punt.’ And they never wanted to punt.”

Still, he hoped the video game would help everyday fans learn the intricacies of football plays and more fully enjoy the sport.

Madden peppered the game development process with teachable moments. Once, at Madden’s house, Hawkins teased Madden for never delivering a playbook with 150 plays that could be used in the game, as was required in his contract.

“He basically pulled a 1980 Raiders playbook off a shelf and handed it to me and said, ‘Here you go,’” Hawkins recalled. “‘Here’s the playbook, you go figure it out.’”

Tim Esfandiari, a former college football player and Twitch streamer who broadcasts Madden games and talks about football to his nearly one million followers, said Madden’s goal of bringing football to the masses inspired him.

“What he wanted to do is a lot like what I try to do with my streams,” said Esfandiari, adding that many of his viewers “are not Americans, don’t know anything about football, but now have gotten into football” through the video game.

Added Cam Weber, the executive vice president of E.A. Sports: “Fans who never had the chance to see Coach Madden on the sideline or hear his voice from the booth know him and have been touched by his legacy through the Madden NFL franchise.”

The game also influenced a generation of players and coaches.

Raheem Morris, who has said he majored in Madden in college, was hired as the Tampa Bay Buccaneers’ head coach in 2009, when he was just 32. He attributed a youth movement among coaches in the sport to Madden: “They’ve been building franchises, they’ve been playing the game, they’ve been setting up plays, creating plays since we were about 12,” he once told The Tampa Bay Times.

Like most long-running franchises, the popularity of Madden NFL has fluctuated over the years. One peak came in the 2003 N.F.L. season when the game’s cover featured the quarterback Michael Vick, who dazzled real-life football audiences with his scintillating speed and rushing ability while becoming game-breaking and unstoppable in the video game.

Ahead of the Atlanta Falcons’ wild-card playoff game against the Green Bay Packers in January 2003, Vick talked with Madden and the announcer Al Michaels. Vick said Madden told him that if the Falcons, a 6-point betting underdog, beat Green Bay, he would put Vick on the video game’s cover for the next cycle. The Falcons did just that.

“I didn’t think it was just because of John — I was one of the most dynamic players at the time and it was just the perfect fit — but John did promise me that and he held true to his word,” Vick said in an interview.

Vick said people constantly tell him that they enjoy using his character in the video game, a credit to the detailed player profiles and distinct styles.

“Me being on the game and what I represented on the game brought more attention to myself and to quarterbacks who look like me and played the game like me,” Vick said. “Now it doesn’t matter what you look or play like — now anyone can grace the front cover.”

In recent years, though, gamers said the title has grown stale. Unlike other hit franchises like League of Legends or Dota, which mostly feature singular games with continuous updates, E.A. releases a new Madden NFL each year, and players often complain that each version feels largely the same, with few new features besides roster updates.

“Things start to fall by the wayside,” Esfandiari said. “There were a lot of people who were upset with the state of Madden for the majority of the 2010s.”

Still, their grumbling has not stopped gamers from continuing to flock to the title, to the extent that some younger fans hardly know that the word Madden means something other than a video game.

“You won’t see Bill Belichick Football in 40 years,” Moore said. “It is unique in video games, it is unique in sports how one person’s name transcends the sport itself.”