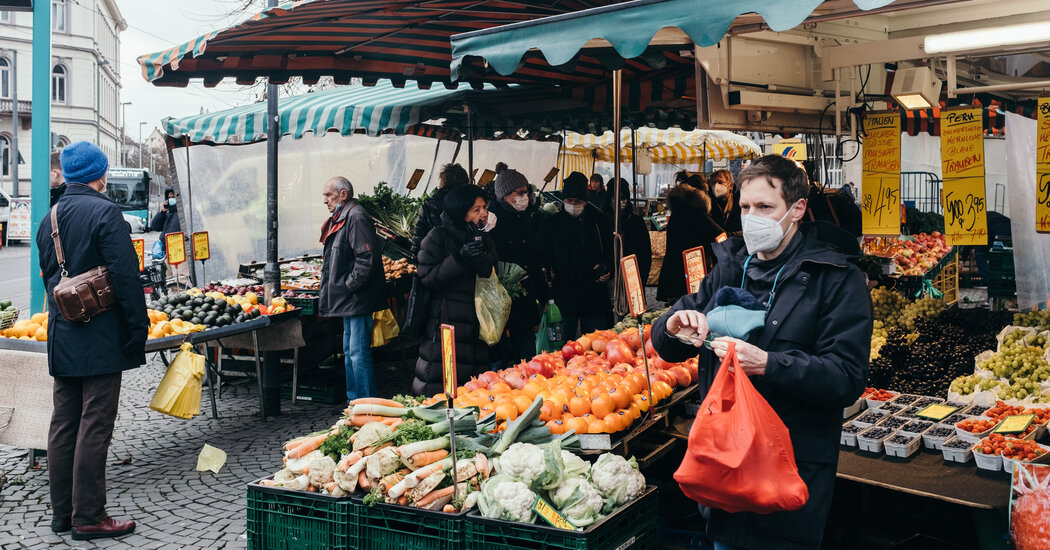 There is still a lot scientists do not know about Omicron. There is cautious optimism — but no certainty — about the effectiveness of vaccines against this fast-spreading variant of the coronavirus, and experts do not fully understand what it means for public health or the economy.

But central banks have concluded they don’t have the luxury of waiting to find out.

Facing surging inflation, three of the world’s most influential central banks — the Federal Reserve, Bank of England and European Central Bank — took decisive steps within 24 hours of each other to look past Omicron’s economic uncertainty.

On Thursday, Britain’s central bank unexpectedly raised interest rates for the first time in more than three years as a way to curb inflation that has reached a 10-year high. The eurozone’s central bank confirmed it would stop purchases under a bond-buying program in March. The day before, the Fed projected three interest rate increases next year and said it would accelerate the wind down its own bond-buying program.

The perception that the Bank of England would “view the outbreak of the Omicron variant with greater concern than it actually did” caused the surprise in financial markets, ” Philip Shaw, an economist at Investec in London, wrote in a note to clients. The Fed also “carried on regardless” with its tightening plans, he added.

Aside from Omicron, the central banks were running out of reasons to continue emergency levels of monetary stimulus designed to keep money flowing through financial markets and to keep lending to businesses and households robust throughout the pandemic. The drastic measures of the past two years had done the job — and then some: Inflation is at a nearly 40-year high in the United States; in the eurozone it is the highest since records began in 1997; and price rises in Britain have consistently exceeded expectations.

The heads of all three central banks have separately decided that the price gains won’t be as temporary as they once thought, as supply chains take a while to untangle and energy prices pick up again.

Andrew Bailey, the governor of the Bank of England, said that policymakers in Britain were seeing things that could threaten inflation in the medium-term. “So that’s why we have to act,” he said on Thursday.

“We don’t know, of course, a lot about Omicron at the moment,” he added. It could slow the economy, and already there are canceled holiday parties, fewer restaurant bookings, less retail foot traffic and signs that more people are staying home. But Omicron could also worsen inflationary pressures, he said. “And that’s, I’m afraid, a very important factor for us.”

Already, price gains have popped higher this year as snarled supply chains and goods shortages have raised shipping and manufacturing costs. Depending on the severity of Omicron and how governments react, the variant could cause factories to shut down and could keep supply chains in disarray and workers at home, prolonging goods and labor shortages and pushing inflation higher.

At the same time, policymakers are assuming the impact on the economy will be milder than previous waves of the virus. With each surge in cases and reintroduction of restrictions, the dent to the economy has gotten smaller and smaller. This would lessen the risk that the central banks end up tightening monetary policy into a downturn.

Still, it is an awkward balancing act. On the same day the Bank of England raised rates, its staff cut half a percentage point from their growth forecasts for the final three months of the year. By the end of 2021, the British economy will still be 1.5 percent smaller than its prepandemic size, the bank estimated.

“From a macroeconomic perspective, it’s unlikely that the fourth wave is going to have as meaningful an impact as we’ve seen even during last winter,” said Dean Turner, an economist at UBS Global Wealth Management.

The economic recoveries from the pandemic, though bumpy, haven’t been derailed yet. Unemployment rates are falling in Europe and the United States, and businesses are complaining that is difficult to hire staff. That, combined with the burst of inflation, was enough to bolster the case for some monetary tightening.

“There’s a lot of uncertainty with the new variant, and it’s not clear how big the effects would be on either inflation or growth or hiring,” Jerome H. Powell, the Fed chair, said on Wednesday. But there is a “real risk” inflation could be more persistent, he also said, which was part of the reason the bank sped up its plans to taper its bond purchases.

Ending the Fed’s bond purchases sooner would give the central bank room to react to a wider range of economic outcomes next year, Mr. Powell said.

“The data is pretty glaring,” Mr. Turner of UBS said of recent statistics on inflation and employment. “There’s only so much caution you can get away with,” before central banks need to take action, he said.

Omicron has created uncertainty in the face of a strong recovery, Christine Lagarde, the president of the European Central Bank said on Thursday after she outlined how the bank would end its largest pandemic-era stimulus measure.

Vaccine-makers are still testing their shots against Omicron and medical officials are encouraging restraint when it comes to socializing rather than implementing new lockdowns, but central bankers are marching ahead because time isn’t on their side. The effect of monetary policy decisions on the wider economy isn’t immediate.

The Bank of England is forecasting that inflation will peak at 6 percent in April, three times the central bank’s target. Within such a short time frame, there is little policymakers can do to stop that from happening, but they can try to signal to businesses and unions setting wages that they will act to stop higher inflation from becoming entrenched, said Paul Mortimer-Lee, the deputy director of the National Institute of Economic and Social Research in London. This may prevent higher prices from spilling over into significantly higher wages, which could cause businesses to raise prices even more.

While all three central banks are facing similar problems with high inflation and are keeping watch over wage negotiations, their future challenges are different.

The Federal Reserve and Bank of England are worried about the persistence of high inflation. For the European Central Bank, inflation in the medium term is too low, not too high. It is still forecasting inflation to be below its 2 percent target in 2023 and 2024. To help reach that target in coming years, the central bank will increase the size of an older bond-buying program beginning in April, after purchases end in the larger, pandemic-era program. This is to avoid “a brutal transition,” Ms. Lagarde said.

She warned against drawing strong comparisons between Britain, the United States and the eurozone economies.

“Those three economies are at a completely different states of the cycle,” she said. “We are in a different universe and environment,” even though there might be some spillover effects across countries from the actions each central bank takes.