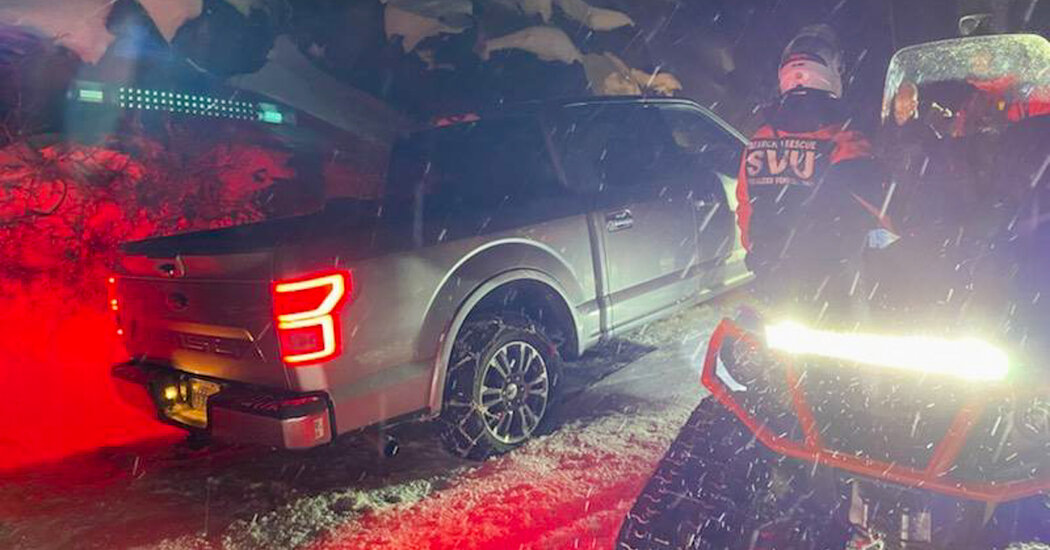 The road once carried stagecoaches during the Gold Rush, twisting its way through what is now a national forest and an area of the Sierra Nevada known for snowmobiling.

In the winter, the rugged passage, known as the Quincy-La Porte Road or County Road 511 in Plumas County, Calif., is closed.

But Wendy Becktold, an editor from the Bay Area who was on her way to visit an ailing relative in Reno, Nev., on Monday, said that she had been unaware of that when she navigated her rented Toyota Corolla while the region was still grappling with a record-setting snowstorm.

Google Maps had guided her that way because two major highways near Lake Tahoe were shut down, she recounted in an interview on Wednesday, echoing concerns of other drivers and public safety officials about the potential hazards of relying too heavily on GPS applications.

They said that Google Maps and Waze, which is also owned by Google, along with other mapping programs, wouldn’t always account for seasonal road closures or treacherous terrain, emphasizing temporary road closures instead.

“There were a lot of cars behind us,” Ms. Becktold said. “Clearly, Google Maps was routing everyone the same way.”

Ms. Becktold, 50, a senior story editor for Sierra, a magazine published by the Sierra Club, said she and her cousin had seen a tree limb on a power line and had passed many cabins as they unknowingly pressed on. Then, a worker in a safety vest waved them off, said Ms. Becktold, who lives in Berkeley, Calif.

“He said, ‘Everybody just keeps showing me their phones,’” Ms. Becktold recalled. “He was just like exasperated.”

A Google Maps spokeswoman said in a statement on Wednesday that the tech company was taking steps to provide drivers with accurate route information.

“In light of the unpredictable conditions from the current snowstorm, our team is working as quickly as possible to update routes in the Lake Tahoe area using details from local authorities.” the spokeswoman, Madison Gouveia, said. “We currently show a winter storm warning to alert drivers in the area, and encourage everyone to stay alert and attentive.”

Google Maps did not answer questions about what kind of safeguards for drivers it uses, including warnings about winter road closings or unpaved roads. SFGate.com earlier reported the white-knuckle detours.

In Washoe County, Nev., which includes Reno, a family of five from Southern California was stranded for two hours on Monday night when their rented pickup truck got stuck in the snow on a two-lane dirt road, the county sheriff’s office said.

The family had sought an alternate route on the way to visit relatives for the holidays in Truckee, Calif., during the storm, which closed an 81-mile stretch of Interstate 80 and contributed to the snowiest December in the Sierra on record.

More than 17 feet of snow had fallen during the month as of Thursday, according to the Central Sierra Snow Lab of the University of California, Berkeley. The storm also closed Highway 50 for about 50 miles in the Sacramento Valley and the Lake Tahoe Basin before it and I-80 reopened.

In a Facebook post on Tuesday, the Washoe County Sheriff’s Office said that the family had ignored illuminated warning signs telling drivers not to use the Dog Valley-Henness Pass Roads.

“However, the family’s GPS won the battle of which technology to listen to,” the sheriff’s office said in a Facebook post on Tuesday, adding that the family had been rescued.

It was not clear what GPS application the family had been using.

In a public warning last week, the Washoe County Sheriff’s Office said that drivers had frequently taken the same detour when using GPS. From November 2020 to last February, emergency responders were called to 11 rescues, according to the sheriff.

Raquel Borrayo, a spokeswoman for Caltrans, California’s state transportation department, said in an email on Wednesday that the agency had tried to reinforce that overreliance on GPS apps could be risky.

“When people try to use mapping apps like Waze or Google Maps to avoid highway closures, they can sometimes be put in very precarious and dangerous situations with unplowed roads/dirt roads, heavy amounts of snow and zero cellphone service,” Ms. Borrayo said. “We always tell people to stay on highways and find alternate routes that way vs. using rural roads. We also recommend people just stay put and wait until the interstate or highway closure has been lifted.”

During this week’s storm, several people posted screen shots on Twitter of Google Maps and Waze directions sending users to the Henness Pass Road, which the Sierra County Historical Society describes as a secluded and winding mountain road that rises to an elevation of 6,920 feet. The road, a primary emigrant trail from Virginia City, Nev., is “left off many maps,” according to a description on the historical society’s website.

The Donner Pass, named for the doomed snowbound pioneer family, some of whom resorted to cannibalism during the 1840s, is about 40 miles from the detour.

A spokeswoman for Waze said in an email on Thursday that the company was committed to helping drivers navigate efficiently and safely.

“In light of this week’s snowstorm and changing weather conditions, Waze Community Map Editors continue to keep our maps updated with the latest real-time routing information,” the spokeswoman, Caroline Bourdeau, said. “We encourage drivers to exercise caution and to stay alert on the road,”

Waze has a filter that allows drivers to avoid unpaved roads.

Crystal A. Kolden, a geographer and disaster scientist who teaches at the University of California, Merced, said she could not believe it when she saw that Google Maps had suggested Henness Pass and other backcountry roads to drivers seeking alternatives to I-80.

“They’re barely drivable in the summer,” Professor Kolden said on Wednesday. “How reliable do these companies have an ethical responsibility to be?”

Professor Kolden, 44, who was at her home near Sonora, Calif., in the foothills of the Sierra during the storm, criticized Google maps on Twitter. Some commenters mocked her post, saying that drivers should take responsibility for monitoring conditions and that she sounded like a Prius-driving millennial.

“Blaming vulnerable people for going down the wrong road is the same as blaming some of those poor vulnerable people who drowned in their basement apartments in New York City not long ago,” she said in an interview, referring to deadly flooding in September.

On Wednesday, Google Maps showed red dots with dashes in them on the road that Ms. Becktold had taken during her circuitous journey on Monday. The road closure warnings hadn’t been there two days earlier, she said.

“It wasn’t like we were just frolicking along, looking for a day in the snow,” Ms. Becktold said.

Ms. Becktold said she had no choice but to return to Berkeley when she had been about 150 miles into the 200-mile trip. Her cousin, who had been trying to reach her ailing brother in Reno, eventually resorted to flying from San Francisco to Reno — through Los Angeles, she said.

“It seems kind of silly in this day and age,” she said, “that there can’t be clearer information online that these roads are closed.”