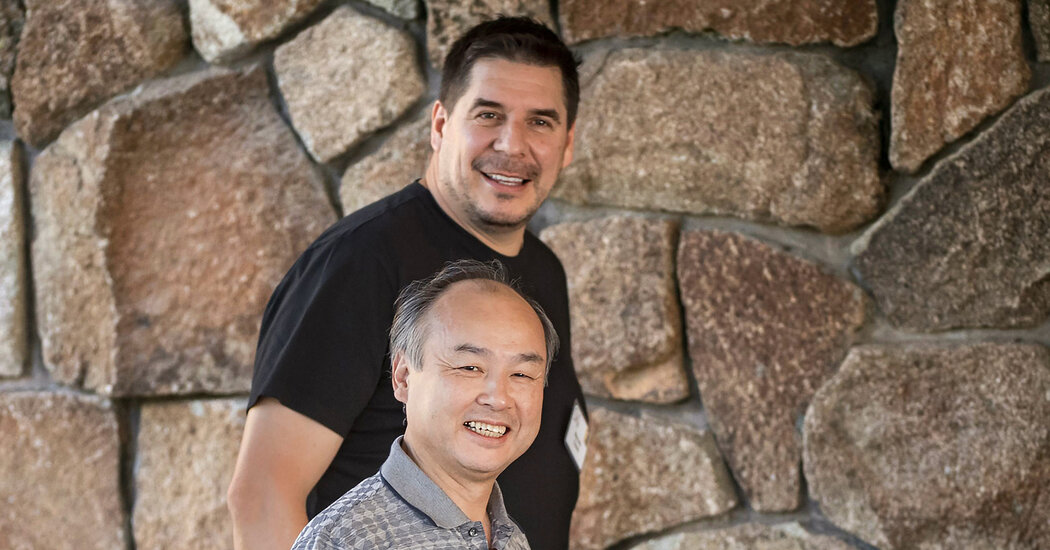 For the past decade, SoftBank and its founder, Masayoshi Son, grabbed headlines mainly for the Japanese conglomerate’s eye-popping investments, becoming a fixture in the American technology scene by spending freely on start-ups and fundamentally reshaping how such companies had been funded.

There was the world’s largest tech investment fund. The billions of dollars pumped into WeWork, the co-working giant. And Mr. Son’s splashy purchase of one of Silicon Valley’s priciest homes.

Now, the bad news is piling up.

This week, SoftBank’s planned $40 billion sale of Arm, a chip designer, to Nvidia, the Silicon Valley chip maker, fell apart because of regulatory setbacks. Shares in a handful of big tech companies that SoftBank owns stakes in, from the Chinese internet giant Alibaba to DoorDash, the food delivery service, have plunged in recent months amid a wider sell-off in high-growth tech stocks. And one of Mr. Son’s key deputies, Marcelo Claure, left the firm in January after a bitter pay dispute — the latest senior executive to depart the firm in the past year.

The slump in SoftBank’s fortunes was reflected in its latest earnings report. The firm said its quarterly earnings fell 97 percent from a year earlier, although it managed to eke out a profit of $251 million during the three months that ended on Dec. 31. SoftBank’s shares, which trade publicly in Tokyo, stayed relatively flat this week, although they are already down by more than half in the past 12 months, as investors grow increasingly wary of SoftBank’s big bets that haven’t paid off.

Mr. Son, who is also SoftBank’s chief executive, acknowledged the firm’s troubles, especially its technology stock holdings. “The storm has not ended; the storm has gotten stronger,” he said in an earnings presentation. Still, he remained upbeat on the firm’s prospects, saying its latest investments put SoftBank at the center of the artificial intelligence “revolution.”

SoftBank’s performance also reflects the firm’s transformation in recent years from an operator of companies, mostly in telecommunications, to an investor in so-called disruptive technology companies, said Pierre Ferragu, an analyst at New Street Research.

Founded in 1981, SoftBank has been one of the biggest backers of start-ups in the United States and globally. After riding the 1990s dot-com boom and bust, Mr. Son largely retreated from American shores until the 2010s.

One of the first signs of his re-emergence came in 2012 when he purchased an estate in Woodside, Calif., for $117 million — one of Silicon Valley’s most expensive homes. He then bought a majority stake in the mobile carrier Sprint in 2013 for roughly $22 billion, installing Mr. Claure as chief executive the next year. Sprint later merged with T-Mobile.

By 2017, Mr. Son had raised $100 billion for the Vision Fund, billed as the largest technology fund ever. With nearly half the money coming from Saudi Arabia, it was SoftBank’s vehicle for large investments in high-growth tech companies such as Uber, DoorDash and WeWork.

Many of those investments are struggling in the public markets now because investors are selling tech stocks, concerned about interest rates rising soon. When rates go up, they put future growth in doubt, and tech companies, which are all about fast growth, are the first to get hit.

Coupang, South Korea’s answer to Amazon, is down nearly 40 percent. Didi, China’s ride-hailing company, has fallen even further, down roughly 70 percent — partly because of that country’s crackdown on its tech giants. SoftBank owns stakes in both companies, which trade on U.S. exchanges, although Didi plans to move its listing to Hong Kong. While SoftBank invested far below the initial public offering price of DoorDash, the delivery company — one of the best-performing stocks in 2021 — is now trading around its I.P.O. price.

The share price of SoftBank’s biggest holding, Alibaba, has dropped about 60 percent from its October 2020 high. SoftBank put more than $10 billion into WeWork, which went public last year and is now trading at less than $6 billion. And after the Arm deal with Nvidia collapsed, SoftBank plans to take the chip design company public instead.

“Even if they’re going through this pain at the moment, they’re still actually in the black,” Mr. Ferragu said of the firm’s latest results.

SoftBank has seen its share of internal turmoil, too. In recent months, at least four senior investors have left or announced plans to leave.

Last month, SoftBank also lost Mr. Claure, one of its highest-profile executives, after an acrimonious compensation battle. Mr. Claure, once a key deputy and close confidant of Mr. Son’s, had argued that his boss promised to pay him $2 billion over several years for his current and future work.

The two men were so close that Mr. Claure once prepared a slide for an investor presentation containing an image from the 1988 movie “Twins,” starring Arnold Schwarzenegger and Danny DeVito — except that the faces of Mr. Claure, who is about 6-foot-6, and Mr. Son, who is roughly a foot shorter, were superimposed on the images of the two actors, two people who viewed the presentation said.

Mr. Claure was also a big spender, often traveling by private jet and known to regularly rack up annual corporate expenses in the high seven figures, said three people familiar with his spending. One of the reasons he flew on private jets when he was executive chairman of WeWork was that SoftBank’s security team determined he was at high risk, one of the people said.

Over the past several years, he and his family have moved between Tokyo, Miami and New York — sometimes at SoftBank’s behest — with SoftBank footing many of those bills. Although that kind of spending raised eyebrows in Japan’s more conservative corporate culture, Mr. Son remained mostly tolerant.

In 2020, one of Mr. Claure’s longtime deputies complained of an abusive workplace. She left with a roughly $30 million payout from SoftBank, said three people with knowledge of the amount. Mr. Son continued to support Mr. Claure.

It wasn’t the first time SoftBank paid a big sum of money to wrap up a problem. In 2019, it announced a plan to pay Adam Neumann, a co-founder and the chief executive of WeWork, $180 million to give up voting control of the company, which was on the verge of bankruptcy. Mr. Claure negotiated that settlement directly with Mr. Neumann.

But Mr. Son refused to budge when Mr. Claure pushed for $2 billion in compensation. Mr. Claure told people that he and Mr. Son had signed a contract for his future compensation, three people briefed on the conversations said. The two men had been negotiating for months, with outside lawyers present. The teams exchanged heated words in an online mediation session in late December, two people briefed on the negotiations said. After that episode, there was little chance that Mr. Claure could stay on at SoftBank. The discussions turned to his departure.

His ultimate exit package included between $30 million and $40 million in severance, according to two people briefed on the arrangement. He will retain his stake in potential profits of SoftBank’s Latin America Fund, which he oversaw; the profits were recently estimated by SoftBank to be worth $300 million to $400 million.

In an investor presentation this week, Mr. Son thanked Mr. Claure for addressing challenges at Sprint and WeWork, but said that since SoftBank’s business model was evolving, it made sense to part ways with Mr. Claure.

Still, a hint of the acrimony was evident in late December when Mr. Claure said in a Twitter post: “People don’t leave their jobs or their companies. They leave their bosses. Treat the people who work for you right.”