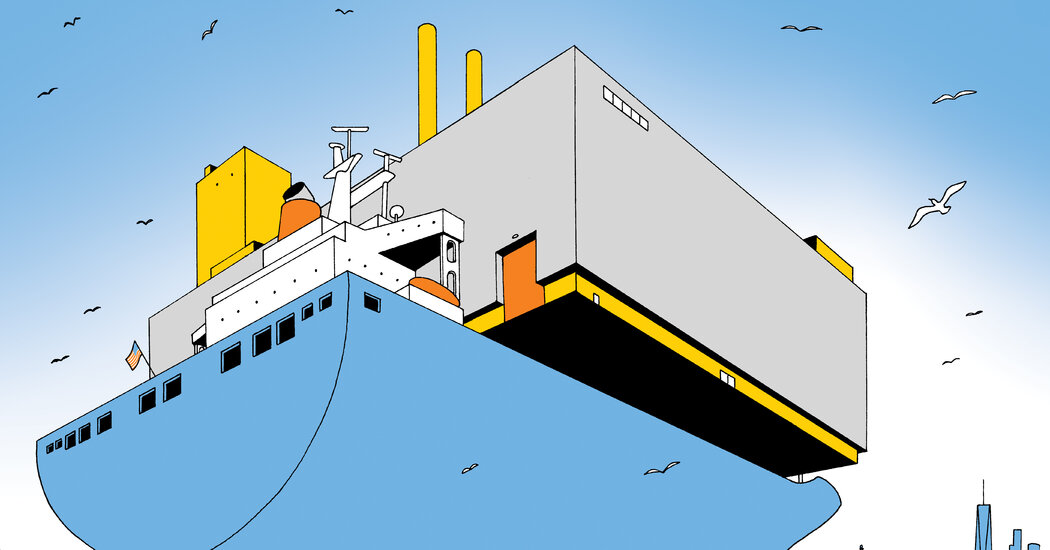 When visitors arrive at the office of America Knits in tiny Swainsboro, Ga., the first thing they see on the wall is a black-and-white photo that a company co-founder, Steve Hawkins, discovered in a local antiques store.

It depicts one of a score of textile mills that once dotted the area, along with the workers that toiled on its machines and powered the local economy. The scene reflects the heyday — and to Mr. Hawkins, the potential — of making clothes in the rural South.

Companies like America Knits will test whether the United States can regain some of the manufacturing output it ceded in recent decades to China and other countries. That question has been contentious among workers whose jobs were lost to globalization. But with the supply-chain snarls resulting from the coronavirus pandemic, it has become intensely tangible from the consumer viewpoint as well.

Mr. Hawkins’s company, founded in 2019, has 65 workers producing premium T-shirts from locally grown cotton. He expects the work force to increase to 100 in the coming months. If the area is to have an industrial renaissance, it is so far a lonely one. “I’m the only one, the only crazy one,” Mr. Hawkins said.

But as he sees it, bringing manufacturing back from overseas — a move often called onshoring or reshoring — has found its moment. “America Knits shows it can be done and has been done,” he said.

Some corporate giants are keen on testing that premise, if not for finished goods then certainly for essential parts.

General Motors disclosed in December that it was considering spending upward of $4 billion to expand electric vehicle and battery production in Michigan. Just days later, Toyota announced plans for a $1.3 billion battery plant in North Carolina that will employ 1,750 people.

Bringing manufacturing back to the United States was a major theme of former President Donald J. Trump, who imposed tariffs on imports from allies and rivals, started a trade war with China and blocked or reworked trade agreements. Still, there was little change in the balance of trade or the inclination of companies operating in China to redirect investment to the United States.

Since the pandemic began, however, efforts to relocate manufacturing have accelerated, said Claudio Knizek, global leader for advanced manufacturing and mobility at EY-Parthenon, a strategy consulting firm. “It may have reached a tipping point,” he added.

Decades of dependence on Asian factories, especially in China, has been upended by delays and surging freight rates — when shipping capacity can be found at all.

Backups at overwhelmed ports and the challenges of obtaining components as well as finished products in a timely way have convinced companies to think about locating production capacity closer to buyers.

New corporate commitments to sustainability are also playing a role, with the opportunity to reduce pollution and fossil fuel consumption in transportation across oceans emerging as a selling point.

Repositioning the supply chain isn’t just an American phenomenon, however. Experts say the trend is also encouraging manufacturing in northern Mexico, a short hop to the United States by truck.

Called near-shoring, the move to Mexico is paralleled in Europe with factories opening in Eastern Europe to serve Western European markets like France and Germany.

“We’re starting to see it in Mexico as well as in the U.S.,” said Theresa Wagler, chief financial officer of Steel Dynamics, a steel maker based in Fort Wayne, Ind. “Many companies now prefer security of supply over cost.”

Mr. Knizek of EY-Parthenon expects industries with complex and more expensive products to lead the resurgence, including automobiles, semiconductors, defense and aviation and pharmaceuticals. Anything that requires large amounts of manual labor, or that is difficult to automate, is much less likely to return.

For items like shoes or furniture or holiday lights, for example, “the economics are daunting,” said Willy C. Shih, a professor at Harvard Business School. “It’s hard to beat wages of $2.50 an hour.”

Although trade tensions and shipping delays are making headlines, Professor Shih added, China retains huge advantages, like a mammoth work force, easy access to raw materials and low-cost factories. “For a lot of what American consumers buy, there aren’t a lot of good alternatives,” he added.

But as the moves by auto and tech companies show, the United States can attract more sophisticated manufacturing. That has been a goal shared by Republican and Democratic administrations, including President Biden’s, which supports $52 billion in subsidies for domestic chip manufacturing.

How the Supply Chain Crisis Unfolded

The pandemic sparked the problem. The highly intricate and interconnected global supply chain is in upheaval. Much of the crisis can be traced to the outbreak of Covid-19, which triggered an economic slowdown, mass layoffs and a halt to production. Here’s what happened next:

A reduction in shipping. With fewer goods being made and fewer people with paychecks to spend at the start of the pandemic, manufacturers and shipping companies assumed that demand would drop sharply. But that proved to be a mistake, as demand for some items would surge.

Demand for protective gear spiked. In early 2020, the entire planet suddenly needed surgical masks and gowns. Most of these goods were made in China. As Chinese factories ramped up production, cargo vessels began delivering gear around the globe.

Then, a shipping container shortage. Shipping containers piled up in many parts of the world after they were emptied. The result was a shortage of containers in the one country that needed them the most: China, where factories would begin pumping out goods in record volumes

“Incentives to help level the playing field are a key piece,” said David Moore, chief strategy officer and senior vice president at Micron. “Building a leading-edge memory fabrication facility is a sizable investment; it’s not just a billion or two here and there. These are major decisions.”

In the aftermath of the coronavirus and restrictions on exports of goods like masks, moving manufacturing closer to home is also being viewed as a national security priority, said Rick Burke, a managing director with the consulting firm Deloitte.

“As the pandemic continues, there’s a realization that this may be the new normal,” Mr. Burke said. “The pandemic has sent a shock wave through organizations. It’s no longer a discussion about cost, but about supply-chain resiliency.”

Despite the big announcements and the billions being spent, it could take until the late 2020s before the investments yield a meaningful number of manufacturing jobs, Mr. Burke said — and even then, raw materials and some components will probably come from overseas.

Still, if the experts are correct, these moves could reverse decades of dwindling employment in American factories. A quarter of a century ago, U.S. factories employed more than 17 million people, but that number dropped to 11.5 million by 2010.

Since then, the gains have been modest, with the total manufacturing work force now at 12.5 million.

But the sector remains one of the few where the two-thirds of Americans who lack a college degree can earn a middle-class wage. In bigger cities and parts of the country where workers are unionized, factories frequently pay $20 to $25 an hour compared with $15 or less for jobs at warehouses or in restaurants and bars.

Even in the rural South, long resistant to unions, manufacturing jobs can come with a healthy salary premium. At America Knits, a private-label manufacturer that sells to retailers including J. Crew and Buck Mason, workers earn $12 to $15 an hour, compared with $7.50 to $11 in service jobs.

The hiring is being driven by strong demand for the company’s T-shirts, Mr. Hawkins said, as well as by a recognition among retailers of the effect of supply-chain problems on foreign sources of goods.

“Retailers have opened their eyes more and are bringing manufacturing back,” he said. “And with premium T-shirts selling for $30 or more, they can afford to.”

A few years ago, Julie Land said she would naturally have looked to Asia to expand production of outerwear and other goods for her Canadian company, Winnipeg Stitch Factory, and its clothing brand, Pine Falls.

Instead, the 12-year-old business is opening a plant in Port Gibson, Miss., in 2022. Fabric will be cut in Winnipeg and then shipped to Port Gibson to be sewn into garments like jackets and sweaters. The factory will be heavily automated, Ms. Land said, enabling her company to keep costs manageable and compete with overseas workshops.

“Reshoring is not going to happen overnight, but it is happening, and it’s exciting,” she said. “If you place an order offshore, there is so much uncertainty with a longer lead time. All of that adds up.”