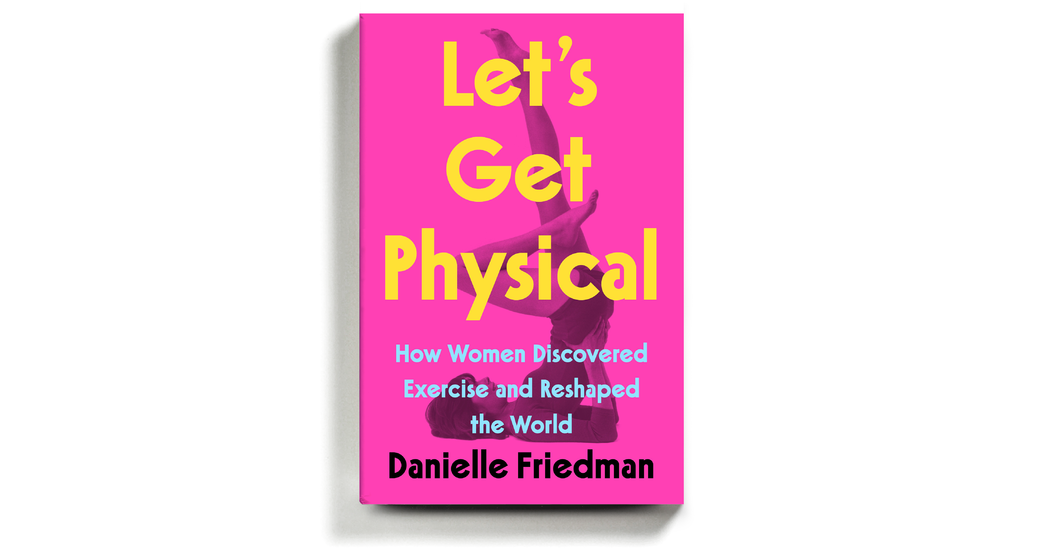 The history of personal fitness is strewn with objects that once gleamed with promise and now seem redundant, even ridiculous. Take the Peloton — please! (As so many are imploring on Craigslist.) And while you’re at it, the step aerobic bench and its modular risers that lurk under the bed, ascended only by dust bunnies. As a bonus we’ll throw in those aptly named “resistance bands” lying idle in the junk drawer. Are we mocking them or are they mocking us?

“Let’s Get Physical,” Danielle Friedman’s fact-packed but bouncy new book about women and exercise in 20th-century America, catalogs many such material curiosities: vibrating belts, Suzanne Somers’s ThighMaster, Get in Shape, Girl! toy sets. It also maps less obvious signposts on the long road from a sedentary standard for the fairer sex — they didn’t call boned bodices “stays” for nothing — to today’s sometimes punishing ideal of regular vigorous activity. Tampons, for example, which came to market in the 1930s but didn’t become widely popular until the 1960s, when they were marketed to the “active woman”; and jagged Vidal Sassoon coifs — “Without having to worry about ruining their carefully crafted bouffant hairdos,” Friedman writes, “women could move their bodies in new ways.”

The designer Mary Quant, Sassoon’s client and friend, also makes a surprise cameo in these pages. Quant is often credited with the miniskirt, that mixed blessing that freed women from constrictive undergarments but subjected them to new standards of girlish slimness. It also apparently inspired the name of a women-only six-mile running race around Central Park in 1972, the Mini-Marathon, sponsored initially by Crazylegs, a new shaving gel.

To analyze the ways we’ve worked out, and why, is maybe inextricable from marveling at what we wore doing it. Few will strain to remember the sweatbands and leg warmers that the actress and fitness pacesetter Jane Fonda made fashionable in the 1980s, or the origin story of the Jogbra. But Friedman also reacquaints readers, charmingly, with the “leotite,” a modest but accommodating one-piece garment made partly of wool and sold at Montgomery Ward; and Gilda Marx’s “Flexatard,” issued in multiple colors and fortified with Lycra, “with all the support of a girdle and none of the cultural baggage.” Both were precursors to the athleisure that currently graces or blights city streets, depending on your point of view. Both were once intended for casual outdoor recreation — more forgiving than jeans — and then evolved into tight encasements of their own, another incentive to develop what one advertisement for Levi’s leeringly called “the best seat in the house.”

Friedman obviously had fun paging through old ads like that one, and the sometimes astonishingly retrograde magazine layouts overseen by serial dieters like Helen Gurley Brown, the longtime editor of Cosmopolitan. But her book’s main event is a relay race of about two dozen female fitness evangelists and entrepreneurs, passing the baton of well-being (or in the case of naughty Lotte Berk, a whip) to each other over the decades.

Some are household names, like Fonda, who made serious bucks selling her signature workout on VHS tapes but later fretted: “I didn’t want pelvic tilts to define me.” In her time, Berk, a rather fearsome-seeming character who taught clenching and pulsing maneuvers to socialites, the writer Edna O’Brien and at least one Bond girl, was also a celebrity, tootling around in a monogrammed Mini Cooper. Berk’s unorthodox method led to the what is now known as barre class, and Friedman’s popular essay on The Cut about its sexual benefits was the germ of this book.

Most enjoyable is when Friedman shines light on less hallowed figures, like Judi Sheppard Missett, the relentlessly upbeat founder of Jazzercise, whose classes “changed the rhythm of women’s days”; and Bonnie Prudden, “the lady in the leotite” and a descendant of Davy Crockett. Prudden complained during the Cold War that America was raising “children with muscles of custard” and posed famously inverted on the cover of Sports Illustrated. After viewing a YouTube clip of Prudden doing calisthenics in capri pants on wall-to-wall carpeting, I promptly ordered a copy of her 1959 fitness manual to get me through a possible Lockdown 2.0.

Having YouTube by your side will complement your reading of this book, in which paradigms are forever shifting and prose, covering so much ground, can sometimes over-contort (“The British shoe brand Reebok danced onto the stage”). Like Gurley Brown, Friedman favors italics. She conducted plenty of firsthand interviews, but some of her punchiest moments come from other sources, like this newspaper’s describing the aftermath of an 800-meter race at the 1928 Olympic Games: “The gals dropped in swooning heaps as if riddled by machine-gun fire.” Or the San Francisco Chronicle columnist who referred to his teenage crush on Prudden, “that alluring tease.”

Along with sexism endemic to the fitness industry, the author carefully tracks elitism and racism, noting how social media has helped level the playing field for leaders such as Jessamyn Stanley, a Black yoga instructor and body positivity advocate with a devoted following. (The fraught importation of yoga to the United States, “unfurling like a lotus flower,” gets its own chapter.)

In 2004, for “n+1,” Mark Greif wrote a lacerating condemnation of modern gyms called “Against Exercise,” arguing that “despite the new emphasis on female athleticism, the task of the woman exerciser remains one of emaciation.” In her own very different style, Friedman offers updates and bracing correctives. Her book is very much “pro” exercise, but for the right reasons: not slimming down but mood management, community, spirituality in the corporal.

We could not have foreseen that a pandemic might make people miss the gym as they do the theater; any chance for collective breath.