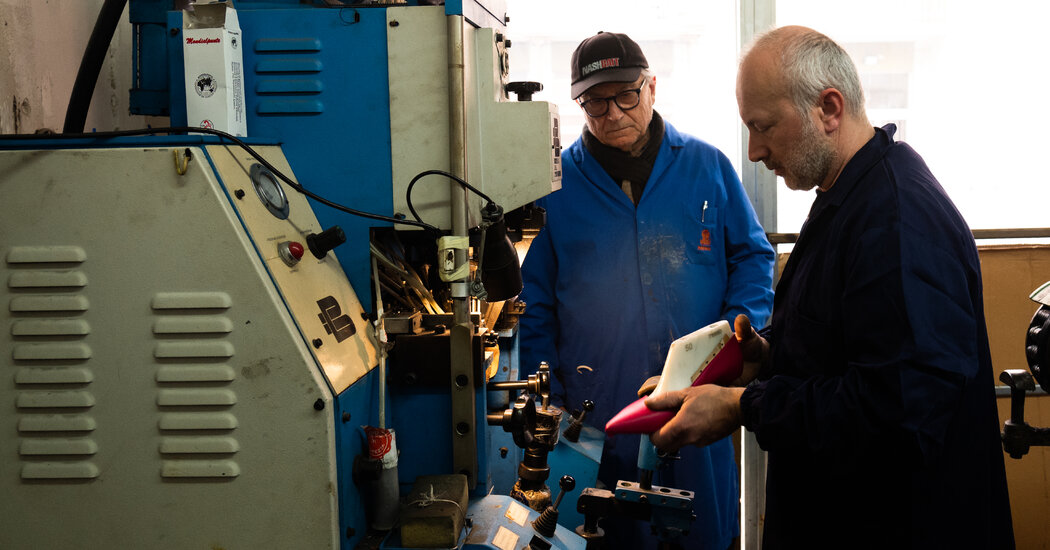 PARIS — The shoes, 600 pairs in all, lay untouched inside an Italian warehouse: magenta sandals, décolleté heels and gold ballerina flats, destined for Russian boutiques but stuck in a limbo of sanctions and economic upheaval from Russia’s war in Ukraine.

Sergio Amaranti, the Italian shoe company saddled with the mountain of unpaid merchandise, is among thousands of European businesses grappling with a widening blowback from the conflict.

“It’s scary,” said Moira Amaranti, who manages the company founded by her father and uncle. She said she worried that the sudden financial loss could destabilize the 47-year-old firm, which sustains her 20 longtime workers and their families. “Russia is half of our business,” she said. “And now we have a problem.”

Russia’s monthlong war on Ukraine is lashing Europe’s economic rebound from the Covid-19 pandemic, threatening its job-rich recovery. Manufacturers and retailers that were benefiting from renewed growth are adjusting to wild swings in business conditions that have injected fresh uncertainty into economic decision-making.

Sanctions intended to punish Moscow for its invasion are blowing back to companies in unexpected ways, undermining confidence and their ability to plan. Small firms like Sergio Amaranti face a hazy future as exports to one of its key markets grind to a halt. Large multinationals that have been pulling back from Russia are assessing the risk of asset seizures or nationalization.

As the disruptions pressure European businesses and their workers, governments in France, Spain and neighboring countries are redirecting spending priorities and pledging huge subsidies to offset the pain, on top of hundreds of billions already spent to keep them afloat during the pandemic.

The European Commission authorized companies affected by sanctions against Russia to receive up to €400,000 ($441,000) in state aid. European businesses and consumers are getting government rebates at the gas pump and in their energy bills.

“The longer the war lasts, the higher the economic costs will be and the greater the likelihood we end up in more adverse scenarios,” Christine Lagarde, the European Central Bank chief, warned on Wednesday. On the same day, Germany, Europe’s largest economy, slashed its forecast for growth in 2022 by more than half, to 1.8 percent.

Cogemacoustic, a family-run enterprise employing 50 people in Limoges, in southwest-central France, never expected a war would have an impact on it. The company, which specializes in mammoth industrial fans used in tunnels and mines, secured contracts for the first time in Russia last summer to help make up for a slowdown in business from pandemic lockdowns, said Marion Oriez, the chief executive.

Russian sales quickly ramped up to 5 percent of the business, and were expected to double this year — until Russia invaded Ukraine. Russian customers were unable to pay €90 million owed for delivered fans because of sanctions on Russian banks, Ms. Oriez said. An additional 20 fans, about the size of small trucks, destined for Russia are sitting on her factory floor — a sunk cost of €350,000.

The company was already grappling with supply shortages and rising commodity and energy costs when the war cut off steel from Ukraine needed to make the fans, requiring Ms. Oriez to find new sources and slowing factory production.

“Our situation is still difficult,” Ms. Oriez said. “There’s a lot of uncertainty for the enterprise.”

At Sergio Amaranti, based in the town of Civitanova Marche among a large cluster of other shoemakers with long ties to the Russian market, managers have faced tough decisions about whether to keep producing despite lost orders.

Ms. Amaranti said she had gathered with her family and workers to decide whether to stop making 500 more pairs of summer shoes that retailers in Russia had ordered. It would probably be impossible to deliver them anytime soon, and seven big Russian orders had already been canceled.

In the end, though, they decided to go ahead with the production, because they had already bought the leather and soles.

“I am very worried,” said Ms. Amaranti, whose priority is to find solutions that will keep her workers paid. “A business owner bears the weight of many families.”

For the Eichbaum brewery in Mannheim, Germany, losing its Russian export market was only the beginning of the problems wrought by the war.

The Russia-Ukraine War and the Global Economy

Shortages of essential metals. The price of palladium, used in automotive exhaust systems and mobile phones, has been soaring amid fears that Russia, the world’s largest exporter of the metal, could be cut off from global markets. The price of nickel, another key Russian export, has also been rising.

Financial turmoil. Global banks are bracing for the effects of sanctions intended to restrict Russia’s access to foreign capital and limit its ability to process payments in dollars, euros and other currencies crucial for trade. Banks are also on alert for retaliatory cyberattacks by Russia.

Germany’s third-biggest exporter of beer, the company had already suffered from two years of crippled sales as the pandemic shuttered bars and canceled festivals, as well as from tangles in its supply chain. Now the price of hops and other grains used in brewing have more than doubled, driven by fears of shortages linked to the expected loss of this year’s crops from Ukraine, known as Europe’s breadbasket, said Uwe Aichele, who is responsible for the brewery’s international sales.

Those problems have been compounded by a lack of aluminum cans and glass bottles — both produced in Ukraine — along with the high price of energy that is plaguing Germany.

“The longer this goes on, the worse it will get,” Mr. Aichele said.

Retailers have to seek out less desirable replacements for commodities that are suddenly in short supply, upsetting customers. A British company, Iceland, is among numerous grocery chains in Europe facing a shortage of sunflower oil from Ukraine, which together with Russia accounts for 70 percent of the global supply.

Iceland has had to start using palm oil again to make various food products, after cutting it out to fulfill environmental sustainability pledges, the managing director, Richard Walker, said in a message to customers on Iceland’s website.

Mercadona, Spain’s largest supermarket operator, introduced a limit of five liters of sunflower oil per consumer. At San Ginés, a century-old cafe in Madrid famous for its churros, a crispy dough fried in sunflower oil, Pablo Sánchez, the manager, said he might have to pass on a 20 percent price rise to consumers.

“We’ve just come out of the nightmare of the pandemic and now we’re facing this war, so these are really times when you need to show extreme resilience to survive as a business,” he said.

At Vetropack, a Swiss maker of glass storage containers with plants throughout Europe, the chief executive, Johann Reiter, is bracing for the possibility that Russia’s aggression may go beyond Ukraine.

Nearly 600 workers at the company’s plant near Kyiv were forced to suddenly stop production when Russian tanks invaded the country. Around 300 tons of molten glass was left to solidify inside the site’s furnace, rendering it useless.

The Ukrainian plant made 700 million beer bottles, jam jars and other containers last year, and without it, Vetropack’s revenue is expected to slump 10 percent. The company can’t make up for the lost production because its other factories are working at capacity, so managers are studying whether to change its mix of products.

Mr. Reiter is keeping a wary eye on neighboring Moldova, where another Vetropack factory operates. The company is preparing for a worst-case scenario in which Russia extends war there, putting evacuation and shutdown plans in place, as well as backup generators and satellite phones for managers to maintain communication.

“It is probably the most difficult period of my time as C.E.O.,” Mr. Reiter said.

Reporting was contributed by Emma Bubola from London, Noele Illien from Zurich, Melissa Eddy from Berlin, and Raphael Minder from Madrid.