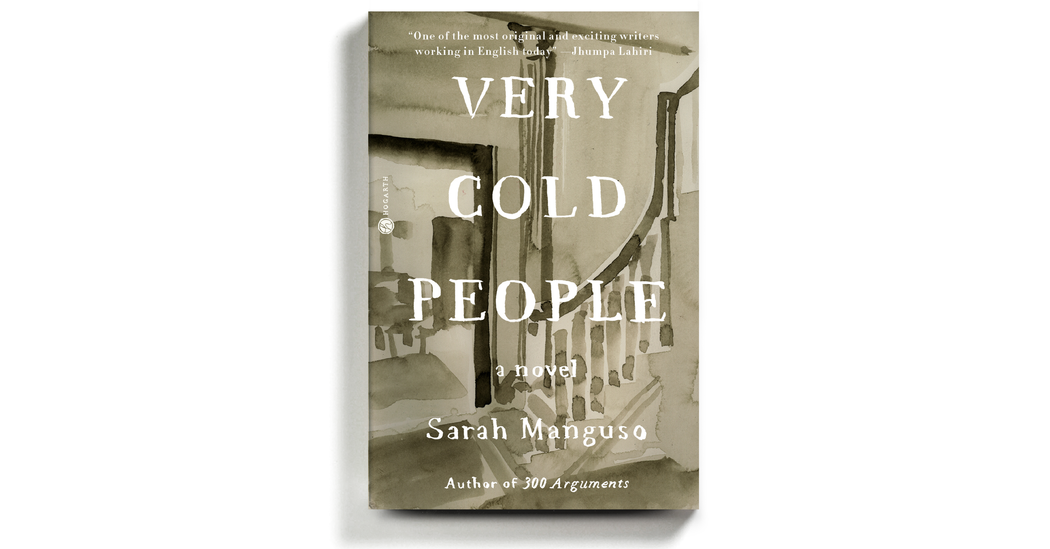 Anatomy may be destiny, as Freud said, but geography is also a major factor. The characters in Sarah Manguso’s first novel, “Very Cold People,” seem quite literally shaped, like ice sculptures, by their habitation of a grim town in Massachusetts. Though fictional, this town reflects certain aspects of New England — like the plaques on older houses and patrician dropped “r”s — with absolute, flinty accuracy.

The town’s name, Waitsfield, suggests a place whose residents are dying for something to happen, or are just dying to leave. (No offense to the real-life Waitsfield, Vt., which looks charming.) “Impatient little thing!” thinks the protagonist, Ruthie, regarding a baby’s grave in the old local cemetery. Her girlhood takes place in the 1980s, but its constraints and cruelties have a 17th-century vibe.

In Waitsfield, snow is common, a constant inconvenience; it “accumulated like dust” and “fell in clumps” and piled into driveways. Ruthie is coming of age and, we hope and trust, planning her escape, over the course of a spare 191 pages that would be even fewer if her story weren’t narrated in short paragraphs separated by white space, like verses. Best known as a memoirist and essayist, Manguso also writes poetry, and this is apparent in her fiction. Though dealing with life’s ugly, messy truths, her writing is compact and beautiful.

Ruthie is an only child, Jewish and Italian in a milieu where to be anything other than a Cabot, Lowell or some other Mayflower-y name is to be considered lesser, “off white.” In nursery school she has what is now known as selective mutism. “I was simply a person who had nothing to share, nothing worth sharing,” she remembers, pitying her “big pink teacher” for not understanding.

Her family does not live in abject poverty (her father is an accountant), but there is, palpably, not enough money for comfort. At their house, whose paint “had faded to the color of dirty snow,” baths can only be filled to the height of one’s hand. Creditors phone constantly, calls that Ruthie has to screen. Everyone thrifts and regifts; gazing at pictures in catalogs and magazines often stand in for having the real thing. Food is processed or bruisedly past its prime, and iced tea and lemonade and milk are all made from powder, as if the sullied snow had edged all the way into the kitchen.

All this might be bearable for Ruthie, but her parents are wicked; not in the Massachusetts slang sense but like Roald Dahl villains: alternately absent or all too present in the claustrophobia of their modest circumstances. Headboards bang; scalps smell; private parts flash and flop. In “Very Cold People,” someone always seems to be bursting embarrassingly into the bathroom. There will be blood. Also phlegm, vomit and other bodily effusions. Even the relative refuge of the school auditorium during a play rehearsal evokes “the inside of a slaughtered animal, all oxblood paint and maroon velveteen.”

Ruthie’s mother in particular — a depressive housewife who croaks and creaks from the bed she sometimes won’t leave — is a piece of work, class-conscious to the point of tacking other families’ WASP-y wedding announcements onto the refrigerator, obsessed with sex and marriage. “You look like a bride,” she tells Ruthie in wonderment, wrapping her in eyelet sheets after an operation. She is also narcissistic and withholding, refusing to repeat the occasional affectionate gesture, like a stroke of the hair or playful spray with a garden hose; oblivious even to the color of her daughter’s eyes, mocking how she looks in braces. “She wanted me to know I was ugly,” a resigned Ruthie concludes. “She was helping me get ready for the world.”

Manguso is terribly poignant on little Ruthie’s faith in a maternal love that isn’t really there, and her dawning comprehension of what might have made it impossible. But in damning increments, she also shows how feminine identity in America can be built up with material objects — dolls, Girl Scout insignia, barrettes, makeup, glittering confetti (another snow-echo) — and then torn down by violation, sexual and otherwise. A gym teacher’s inappropriate touch; a shoe salesman’s remark; a friend’s creepy dad; frottage on the commuter rail. All these things happen, in an era when such events were often considered not reportable offenses but just a part of growing up — character-building, even.

“You can learn to eat violence,” Ruthie philosophizes about her encounters with a classroom bully. But inevitably it will be disgorged in self-harm cloaked as self-soothing: hair pulling, nail peeling, unswallowed meals wadded into napkins. When the migraines arrive, with their blinding halos, it’s almost a relief.

So masterly is Manguso at making beauty of boring old daily pain that when more dramatic plot turns arrive — suicides, teen pregnancies — they almost seem superfluous, visitations from an after-school special. The book is strong enough as a compendium of the insults of a deprived childhood: a thousand cuts exquisitely observed and survived. The effect is cumulative, and this novel bordering on a novella punches above its weight.