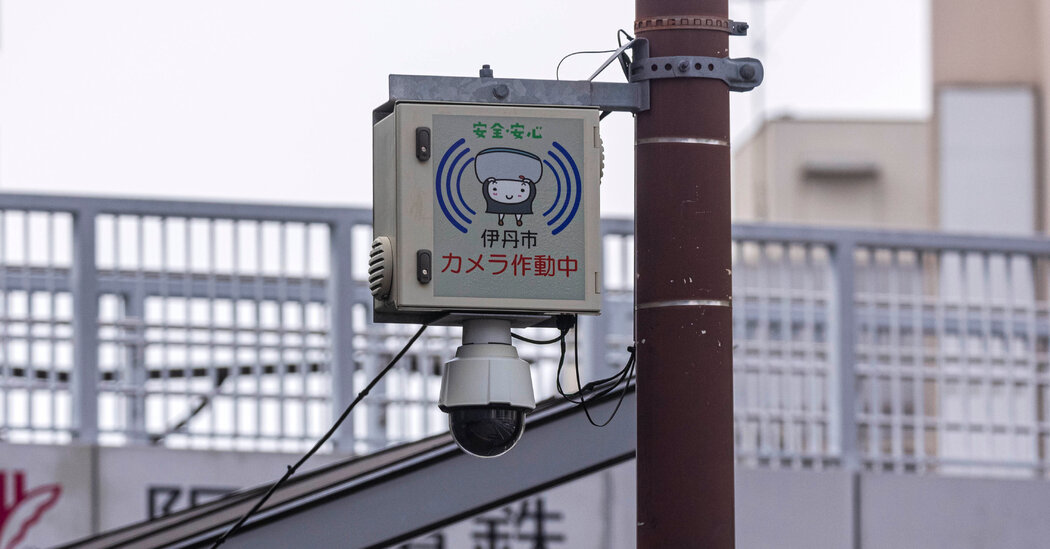 The first time, the police found him sitting in front of a vending machine 17 miles from home. He began to go missing regularly, once wandering for two days before turning up at a stranger’s apartment, hungry and barely able to remember his name, his mind clouded by dementia.

At a loss for what to do, his family asked the local government to put Mr. Uchida under digital surveillance.

In Itami, the suburb of Osaka where Mr. Uchida’s family lives, more than 1,000 sensors line the streets, each unit emblazoned with a smiling cartoon figure bracketed by Wi-Fi squiggles. When Mr. Uchida went out walking, the system recorded his location through a beacon hidden in his wallet and sent his family a steady stream of alerts. When he veered off course, the family could easily find him.

Itami is one of several localities that have turned to electronic tracking as Japan, the world’s grayest nation, confronts an epidemic of dementia. The programs offer the promise of protecting those in cognitive decline while helping them retain some independence, but they have also evoked fears of Orwellian overreach.

Japan’s surveillance efforts presage the conundrums facing countries across the globe as their populations rapidly age: how to manage the huge expense of care for people living ever-longer lives, as well as the social costs to families and other loved ones.

The Japanese government sees the task as critical to the country’s future stability, envisioning fundamental changes to nearly every aspect of society, including education, health care and even, as in Itami, infrastructure.

The surveillance system there is one of the more extreme examples of this adaptation. Advocates for people with dementia, including some with the condition itself, have raised serious concerns about digital tracking, warning that the convenience and peace of mind offered by surveillance could threaten the dignity and freedom of those under watch.

The monitoring of older people has deepened questions of consent as electronic surveillance systems have become a fixture worldwide, applied broadly both in wealthy, open nations like the United States and Britain and in authoritarian ones like China.

Japanese people are intensely protective of their personal privacy, and many municipalities have adopted less intrusive forms of electronic tracking. As with any tool, the value of the Japanese systems will ultimately be determined by how they are used, said Kumiko Nagata, the lead researcher at the Tokyo Dementia Care Research and Training Center.

She sees promise in applications that give users more freedom by relieving fears that they will get lost. But she worries that the systems will “just be used as tools for dealing with ‘problem’ people” — anyone who has become a burden on a family or officials.

As the nation with the world’s oldest population, Japan is most vulnerable to the ravages of dementia: memory loss, confusion, slow physical decline and, most heartbreakingly, the ineluctable dissolution of the self and relationships with others.

Japan has the world’s highest proportion of people with dementia, at about 4.3 percent of the population, according to an estimate by the Organization for Economic Cooperation and Development. A 2012 Japanese government study found more than 4.62 million residents with dementia, and some researchers estimate that a quarter of the Japanese population will have the condition by 2045.

Dementia is the leading cause of missing-person cases in Japan. More than 17,000 people with dementia went missing in 2020, up from 9,600 in 2012, the first year official data was reported.

That year, the government issued its first national dementia policy, and it has been grappling ever since with building a legal framework to better accommodate those with the condition.

One major outcome has been an increased focus on helping people with dementia “age in place” — instead of consigning them to nursing homes — in hopes of improving their quality of life and lessening the load on overtaxed care facilities.

But home-based dementia care can be a major source of anxiety for caregivers and those in cognitive decline. While many localities in Japan offer adult day care, it can be expensive and leave gaps in supervision for those most likely to wander.

National policies and messaging on accommodating those with dementia often conflict with social expectations and the behavior of local authorities. Families sometimes hide away people with dementia, fearing that erratic behavior could attract social stigma or inconvenience the community. For those who repeatedly wander, the police may pressure families to keep them at home or closely monitor their movements.

In 2007, a 91-year-old man with dementia wandered away from his home in central Japan and was hit and killed by a train. Its operator sued his grieving family for damages arising from the delay in service, and a regional court ruled in the company’s favor. The decision was reversed on appeal, but the damage was done for families worried that a slip-up could be ruinous.

Public perceptions of those with dementia have improved in the last decade, said Miki Sato, 46, who was diagnosed with dementia at the age of 43 and staffs a company that provides work opportunities for others with the condition. But there is still a tendency to put families’ needs above those of individuals, she said.

For Ms. Sato, who helped develop an app with location tracking to assist people with dementia as they shop for groceries, “the most important thing is that it’s that person’s choice.”

Still, her fear of becoming lost is real: On bad days, train stations and street names blend together, and addresses dance at the edge of her memory.

“As my symptoms advance, I could imagine that I might use them myself,” she said of the tracking systems.

When people with dementia disappear, most Japanese communities still take an analog approach to finding them. Volunteer search teams are activated, and the authorities play alerts on local radio stations or on the public address systems found in most neighborhoods.

Some localities have turned to low-tech solutions, such as key chains with instructions on how to help those who are lost. But as more people with dementia live at home, digital solutions have become more alluring.

Those range from the more intrusive, such as security cameras and tracking devices that can be slipped into a shoe, to more passive options like QR codes that can go on a fingernail and alert caregivers when scanned.

Although localities and companies have made large investments in developing and promoting the programs, they remain sparsely used, in part because of ethical concerns.

The problem of informed consent in particular is a tricky one, especially in cases where it can be difficult to assess whether a person with dementia is capable of giving it.

The registration process for the systems is typically initiated by caregivers, and only as a last resort. Medical professionals then evaluate prospective surveillance candidates. They are not required to notify the individuals themselves.

Take, for example, the city of Takasaki in central Japan, which introduced its own GPS tracking system in 2015. Much like their peers in Itami, caregivers there can unilaterally share their wards’ photos and give the police permission to get access to their location data.

Itami’s mayor, Yasuyuki Fujiwara, said that when he first proposed a surveillance program, he was “worried about the perception that we would be spying on private citizens.”

Mr. Fujiwara initially pitched the idea as a tool for stopping crime and keeping an eye on children as they walked to school. Before long, cameras began popping up citywide, their locations chosen with public comment. In 2015, the city opened the program to the families of older people prone to wandering.

The cameras themselves don’t track people. They are equipped with receivers that communicate with small beacons carried by those enrolled in the program. When bearers of the beacons pass by, the device records their position and sends it to a smartphone app that an authorized caregiver can check.

Mr. Fujiwara offered assurances that the data could be viewed only by the family. Still, only 190 older people used the program last year, while nearly half of all elementary school students in the city of 200,000 were registered.

Mr. Uchida’s son, Shintaro, who works in the city hall, signed his father up in 2019. (His family agreed to discuss Mr. Uchida’s experience to further public understanding of dementia.)

His father was a proud man who believed in staying busy. After he retired, he immediately landed another job. In his early 70s, though, he began having trouble driving. His memory faded.

Mr. Uchida, now 78, had spent decades in Itami, raising his family and working at a printing company. But when he went on his daily walks, the streets were no longer familiar. During one month, Mr. Uchida disappeared three times, his wife, Keiko, said. The tracking program helped slow his wandering, but could not stop it.

In March, his family reluctantly placed him in a nursing facility.

His beacon now sits in his home, indicating only his absence.