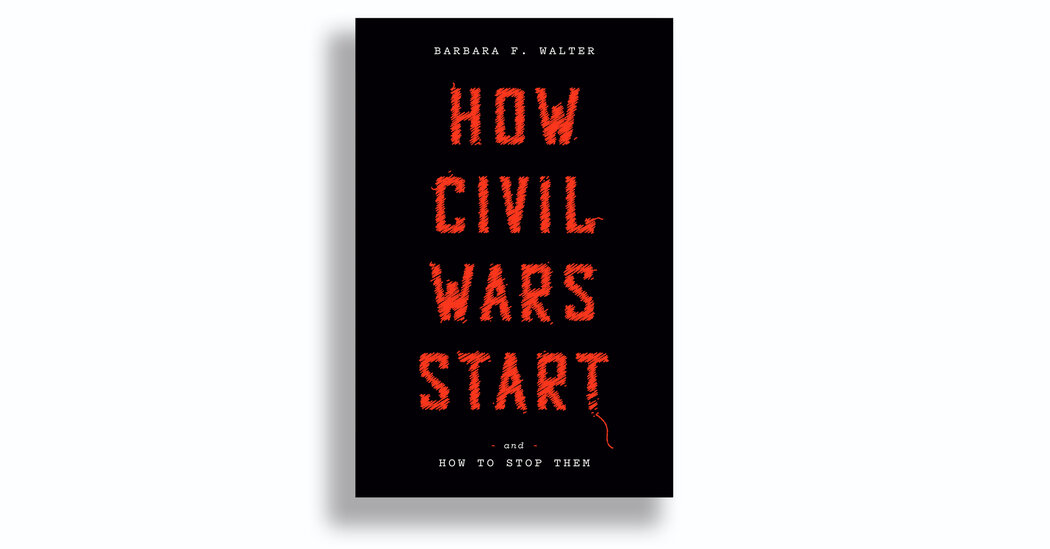 In the year since the rampage at the Capitol, chatter about a 21st-century American civil war has seeped from the fringes into the mainstream. During the Trump presidency, there were of course any number of books about political fracture; still, they mostly discussed widening but (usually) peaceable differences (Lilliana Mason’s “Uncivil Agreement,” Ezra Klein’s “Why We’re Polarized”), or they focused mainly on the historical roots of political violence (Joanne B. Freeman’s “The Field of Blood,” Kathleen Belew’s “Bring the War Home”).

By contrast, predictions of an imminent conflagration tended to come from those quarters that also celebrated it, on MAGA Twitter and its companion talk shows, invoking the paranoid fever dreams of the far-right. The logic was hard to follow, but it often went something like this: Snowflakes (i.e. liberals), despite being so wimpy that they’re cowed into wearing “face diapers” (i.e. masks), were physically preparing to muscle their way to a gun-free hellscape of gender-neutral bathrooms and critical race theory.

Who wanted to dignify such dumb scenarios with sober analyses? “These prophecies have a way of being self-fulfilling,” Fintan O’Toole recently wrote in The Atlantic, in a critique of a new book by the Canadian novelist and cultural critic Stephen Marche, “The Next Civil War.” O’Toole recoiled at Marche’s lamentations that catastrophe was inevitable, and at his speculative narratives of what might hasten the collapse. Such visions don’t just distract us from the chronic, less spectacular problems the country faces, O’Toole argued; apocalyptic premonitions are “flammable and corrosive,” making people so fearful of one another that “the logic of the pre-emptive strike sets in.”

When Barbara F. Walter began writing “How Civil Wars Start” in 2018, the few people who heard that it was “about a possible second civil war in America” thought it was “an exercise in fear-mongering,” she writes in her acknowledgments, “perhaps even irresponsible.” That “even” gives you a sense of Walter’s cautious inclinations. As a political scientist who has spent her career studying conflicts in other countries, she approaches her work methodically, patiently gathering her evidence before laying out her case. She spends the first half of the book explaining how civil wars have started in a number of places around the world, including the former Yugoslavia, the Philippines and Iraq.

Only a fanciful vignette about two-thirds of the way through — envisioning a morning of chaos in November 2028, with bombs going off across the country as California wildfires rage — made me think that Walter was “fear-mongering,” or at least pandering to our most literal-minded instincts. Then again, if things are as dire as she says, forcing us to see what a collapse might look like may arguably be the responsible thing to do.

She suggests that we have gotten to this point because of a “failure of the imagination”; our realm of possibility has been hemmed in by the historical example of the American Civil War, with its muddy embankments and men on horseback. The range of her case studies implies that another damper on the American imagination has been an insistent exceptionalism — the belief that political collapse is something that happens elsewhere.

Contemporary civil wars are in some sense common (Walter says there have been “hundreds” in the last 75 years), and in another sense rare. In any given year, only 4 percent of the countries that “meet the conditions for war” actually descend into one. “Civil wars ignite and escalate in ways that are predictable; they follow a script,” Walter writes in her introduction, in what I thought was a bit of mechanistic hyperbole. It turns out that she and other scholars have identified certain risk factors, signs that things are starting to go awry.

Walter has a political scientist’s fondness for data sets and numerical scales. She says that the United States is firmly within the “danger zone” of a “five-point scale” measuring factionalism and a “21-point scale” measuring a country’s “polity index,” where a full autocracy gets a -10 and a full democracy gets +10. (We’ve slid from +10 to +5 in a few years, occupying what Walter and her colleagues call the not-quite-democratic and not-quite-autocratic zone of an “anocracy.”) The numbers serve a function, corralling troubling observations into a cold system of measurement that presents itself as beyond dispute, seemingly nonpartisan and scientific. The numbers also allow her to offer empirical grounding for her work while she makes her way toward some blunt conclusions: “Today, the Republican Party is behaving like a predatory faction.”

Of course, nothing is beyond dispute anymore — and the book has a chapter on that, too. Social media, for all its initial promises of interpersonal harmony, has become an efficient machine for stoking rage, tearing people apart when it isn’t bringing extremists together. An “ethnic entrepreneur” seeking to amass power by making bigoted appeals to a particular group doesn’t need an especially sophisticated disinformation campaign to get people to feel fearful and despairing, convincing them to turn against a democracy that includes people they hate. There’s comfort in assuming that autocracy has to arrive with a military coup: “Now it’s being ushered in by the voters themselves.”

America lucked out, Walter says, because “its first modern autocratic president was neither smart nor politically experienced.” She ticks off the risk factors that have already been met here — factionalism, democratic decay, lots of guns. There is also, crucially, a once-dominant group whose members are fearful that their status is slipping away. It isn’t the downtrodden masses that start a civil war, Walter says, but rather what she and her fellow scholars call “sons of the soil.” Their privileged position was once so unquestioned and pervasive that they simply assume it’s their due, and they will take to violence in order to cling to power.

Walter’s earnest advice about what to do comes across as well-meaning but insufficient — though I’m not sure how much of it is her fault, considering that the situation she has laid out looks too inflamed to be soothed by a few pointers in a book. “The U.S. government shouldn’t indulge extremists — the creation of a white ethno-state would be disastrous for the country.” Thank you, Professor Walter. She proposes that the government instead “renew its commitment to providing for its most vulnerable citizens, white, Black or brown.” This, too, seems unobjectionable — but she also makes clear that right-wing militias planning to kidnap and murder government officials are zero-sum thinkers; they experience any benefit that might be shared by people who don’t look like them as a grievous loss.

While the blithely unworried are hindered by too little imagination, the florid fantasies of QAnon show that some Americans are beset by too much of the same. Walter mostly sticks to citing the scholarship in her field, but at one point, discussing the sinister clowning of Alex Jones, she reaches for Voltaire: “Those who can make you believe absurdities can make you commit atrocities.” The absurdities are by definition preposterous, but Walter’s book suggests that it would be preposterous to assume they’re irrelevant; it’s only by thinking about what was once unfathomable that we can see the country as it really is.