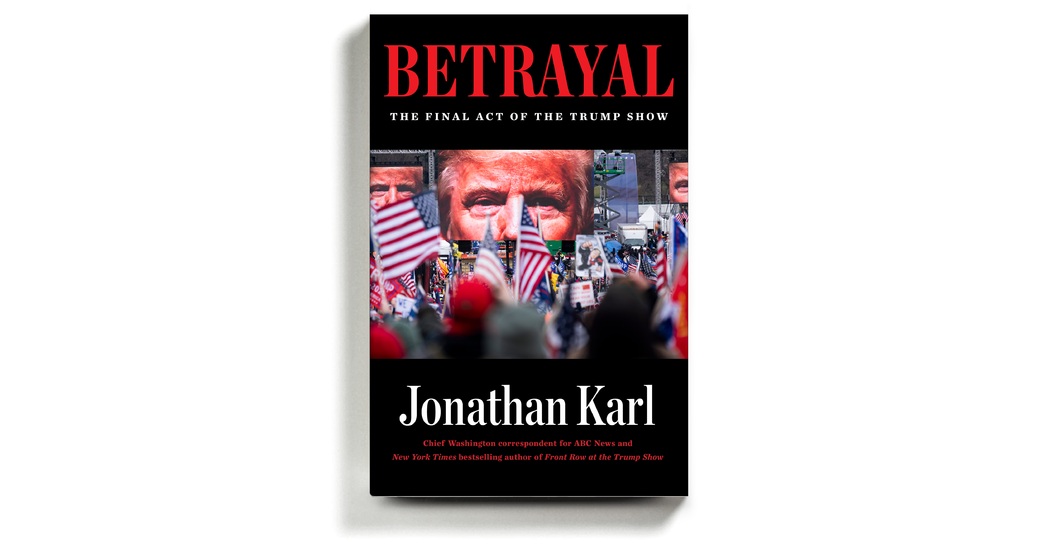 By the looks of his formidable résumé, the veteran Beltway journalist Jonathan Karl shouldn’t startle all that easily. “Karl has covered every major beat in Washington, D.C., including the White House, Capitol Hill, the Pentagon and the State Department,” his author bio notes, “and has reported from the White House under four presidents and 14 press secretaries.” Until recently he was the chief White House correspondent for ABC News — a perch that placed him, as he put it in the title of his previous book, “Front Row at the Trump Show.”

Yet in his new book, “Betrayal: The Final Act of the Trump Show,” Karl comes across as almost poignantly ingenuous and polite to a fault, repeatedly flummoxed by what he saw in the last year of the Trump administration. “Front Row,” which had the unfortunate timing of being published in March 2020, before the consequences of Trump’s governance were fully laid bare, began with a solemn tribute to “objectivity and balance” and a complaint that “the mainstream media coverage of Donald Trump is relentlessly and exhaustively negative.” Just a year-and-a-half later, after 750,000 American Covid deaths and an attack on the Capitol, Karl allows that the “Trump show” may have in fact been more sinister than mere theatrics after all.

“I have never wavered from my belief that journalists are not the opposition party and should not act like we are,” Karl maintains in “Betrayal.” “But the first obligation of a journalist is to pursue truth and accuracy. And the simple truth about the last year of the Trump presidency is that his lies turned deadly and shook the foundations of our democracy.”

“Betrayal” is presented as an inside look at what happened in the last months of the Trump White House, beginning on Feb. 10, 2020. At the time, news about a novel coronavirus in China was percolating throughout the United States, but staffers in the White House seemed more immediately threatened by Johnny McEntee, a 29-year-old former college quarterback who went from carrying President Trump’s bags to becoming the director of the Presidential Personnel Office — “responsible for the hiring and firing of more than 4,000 political appointees across the federal government.”

McEntee saw it as his duty to purge from the executive branch anyone deemed insufficiently loyal to the president; less than a year later, on Jan. 1, McEntee would send a text message to Mike Pence’s chief of staff insisting that the vice president had the authority to overturn the results of the November election. He pointed speciously to an episode involving Thomas Jefferson as an example.

The full (and absurd) text of the memo is one of several scoops Karl offers in this book, along with another memo from McEntee’s office, sent less than a month before the election, outlining why Defense Secretary Mark Esper should be fired. (Esper’s supposed transgressions included focusing the department on Russia and “actively pushing for ‘diversity and inclusion.’”) Karl also says that Trump threatened to create his own political party, backing down only when Ronna McDaniel, the chairwoman of the Republican National Committee, countered by threatening to give away the valuable email list of his 40 million supporters for free — “effectively making it impossible for Trump to make money by renting it out.”

McDaniel and Trump have since denied any such standoff — Trump even denied it to Karl’s face, in one of the last interviews he granted for “Betrayal.” During the same interview, Trump reminisced about the speech he gave on Jan. 6, 2021, shortly before the attack on the Capitol, calling it “a very beautiful time with extremely loving and friendly people.” Karl, at least inwardly, was aghast. “I was taken aback by how fondly he remembers a day I will always remember as one of the darkest I have ever witnessed,” he writes, adding that Trump seemed to justify the death threats made against his own vice president. “It boggled my mind,” Karl says.

It did? The author’s expressions of surprise are so frequent and over-the-top that they are perhaps the most surprising parts of this book. “Betrayal” is less insightful about the Trump White House and more revealing of Karl’s own gradual, extremely belated awareness that something in the White House might in fact be awry. Events strike him as “wacky,” “crazy,” “nuts.” He delves into the outlandish conspiracy theories around the presidential election, earnestly explaining why each of them is wrong. He scores a number of on-the-record interviews with Trumpworld insiders — nearly all of whom insist that even as they publicly sided with Trump, they were bravely telling the president some very tough truths in private.

Karl recalls Sept. 10, 2020, as a turning point for him: the day he asked “the most forcefully confrontational question I had ever asked of a president — or any other political leader.” By that point Trump had been playing down the pandemic for half a year, insisting the coronavirus “affects virtually no one.” Karl, who until that moment had “cringed” when he heard other reporters use the word “lie,” was sitting in his front-row seat at a briefing and moved to press Trump: “Why did you lie to the American people, and why should we trust anything you have to say now?”

Understand the Claim of Executive Privilege in the Jan. 6. Inquiry

A key issue yet untested. Donald Trump’s power as former president to keep information from his White House secret has become a central issue in the House’s investigation of the Jan. 6 Capitol riot. Amid an attempt by Mr. Trump to keep personal records secret and the indictment of Stephen K. Bannon for contempt of Congress, here’s a breakdown of executive privilege:

What is executive privilege? It is a power claimed by presidents under the Constitution to prevent the other two branches of government from gaining access to certain internal executive branch information, especially confidential communications involving the president or among his top aides.

What is Trump’s claim? Former President Trump has filed a lawsuit seeking to block the disclosure of White House files related to his actions and communications surrounding the Jan. 6 Capitol riot. He argues that these matters must remain a secret as a matter of executive privilege.

Is Trump’s privilege claim valid? The constitutional line between a president’s secrecy powers and Congress’s investigative authority is hazy. Though a judge rejected Mr. Trump’s bid to keep his papers secret, it is likely that the case will ultimately be resolved by the Supreme Court.

Is executive privilege an absolute power? No. Even a legitimate claim of executive privilege may not always prevail in court. During the Watergate scandal in 1974, the Supreme Court upheld an order requiring President Richard M. Nixon to turn over his Oval Office tapes.

May ex-presidents invoke executive privilege? Yes, but courts may view their claims with less deference than those of current presidents. In 1977, the Supreme Court said Nixon could make a claim of executive privilege even though he was out of office, though the court ultimately ruled against him in the case.

Is Steve Bannon covered by executive privilege? This is unclear. Mr. Bannon’s case could raise the novel legal question of whether or how far a claim of executive privilege may extend to communications between a president and an informal adviser outside of the government.

What is contempt of Congress? It is a sanction imposed on people who defy congressional subpoenas. Congress can refer contempt citations to the Justice Department and ask for criminal charges. Mr. Bannon has been indicted on contempt charges for refusing to comply with a subpoena that seeks documents and testimony.

It was a good question, though it simply got turned, like so many exchanges during those briefings, into more Trump theater, with the president scowling and calling Karl “a disgrace to the ABC television network.” You also wonder how Karl, who mentions in his previous book that George W. Bush took the country to war with Iraq under false pretenses, had spent two decades covering politics without asking anything so “forcefully confrontational” before. “Front Row” includes a conversation in which Karl informed Trump that calling the press “the enemy of the people” was perhaps dangerous: “‘Some sick person might take your words to heart,’ I told him. ‘I hope people take my words to heart,’ he said, missing the point that I was warning of possible violence against journalists.”

Or perhaps it wasn’t Trump who was missing the point of that exchange — something that didn’t seem to occur to Karl, apparently so entrenched in his establishmentarian assumptions that until very recently he deemed certain distressing possibilities simply unfathomable. More than a year before the 2020 election, Karl asked John Kelly, Trump’s former chief of staff, what would happen if Trump lost and refused to concede. Kelly was sure that Trump would leave — and “if he tried to chain himself” to his Oval Office desk, “they would simply cut the chains and carry him out.”

Karl recalls being impressed by Kelly’s tone of confident authority. “I didn’t ask any more questions, but I still had a few,” he writes — a strange admission for the chief Washington correspondent of a major network. “The scenario described by John Kelly seemed too disturbing — and too absurd — to consider any further. I tried not to think about it again.”

The Trump era blew a hole through all kinds of institutional norms and presuppositions, revealing vulnerabilities and blind spots. It probably speaks to Karl’s decency as a person that he didn’t want to contemplate anything so terrible, but for all the high-minded talk in his books about the journalistic pursuit of accuracy, he gives little indication that he had the imagination to handle the truth.