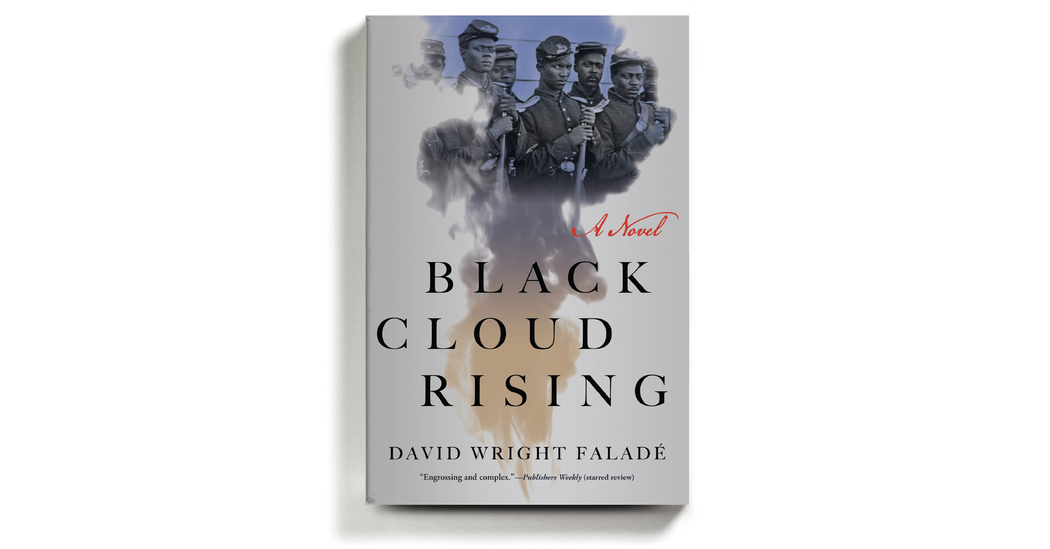 There’s nothing pulpy about David Wright Faladé’s “Black Cloud Rising.” It’s a Civil War novel based on the actual experiences of the African Brigade, a unit of Black soldiers, including many freed, recently enslaved people, that in 1863 poured into the coastal South with Union forces, helping to hunt down rebel guerrillas.

Faladé’s book is so accessible and rousing, though, that you hope it becomes available as a mass-market paperback, in packaging that more clearly announces: This book is a straight-up page-turner.

There are no braided points of view here, no too-pretty words, no splintered syntax. No leaden diagnoses of the human predicament belch on the smoky skyline. The nature of the American experiment is implicitly questioned but not burned to the ground.

What is burned to the ground, satisfyingly, are the houses of holdout slave owners, landed aristocrats. This is a classic war story told simply and well, its meanings not forced but allowed to bubble up on their own.

“Black Cloud Rising” — the title comes from a Civil War-era song about Black men in battle — is based not just on a real regiment but on a real figure, Sgt. Richard Etheridge. The son of an enslaved woman and her master, Richard — everyone in the novel calls him Dick — was taught to read and write. He was treated (crucial word) almost like a member of that master’s family.

Faladé, a professor of English at the University of Illinois, has written about Etheridge before. Among his previous books is “Fire on the Beach” (2000), written with David Zoby, which explores Etheridge’s postwar years with a unit that was a forerunner of the Coast Guard.

“Black Cloud Rising” focuses almost entirely on Etheridge’s wartime experience. He was a young-looking 21 when he signed up. Etheridge says it about one of his soldiers, but one might also say it about him: “He come in a puppy, but mister, he would leave a dog.”

Wild was a pitiless and provocative warrior: He liked to goad, to rouse tempers, to leave rubble in his wake, to impose Carthaginian terms. He emancipated enslaved people as he moved along. The Black men who served under him, in “Black Cloud Rising,” admire him deeply. They pay him their highest compliment: They use the N-word when referring to him.

Wild had no intention of sneaking into the South. He wanted to make a terrifying noise.

In “Absalom, Absalom,” William Faulkner described the sight of young men marching away to battle as “probably the most moving mass-sight of all human mass-experience.”

For many Southerners, the arrival of Etheridge and his men was the inversion of that sight. The impact these soldiers had on the South was baneful. The formerly enslaved people boomed “Go Down Moses” as they marched. The blue coat was “a dread costume on a freed slave’s back.”

Etheridge and his men are aware of the wider impact they are making, what their success means to all African Americans. Etheridge is living far from the flagpole, as soldiers sometimes say. He knows what will happen to him if captured. He senses he is living at the crest of a wave.

“The Abolitionists hoped that bedecking slaves in Union blue and enlisting us in a fight for our own freedom would make men of us,” Etheridge says. “The possibility inspired divineful awe, long-awaited witness that the monkey was ready to grind his own street organ. For Copperheads, the idea of us bearing up as fully men would damn near signal the apocalypse. Wouldn’t be no returning from that.”

“Black Cloud Rising” becomes a study in divided loyalties. What does Etheridge owe his father’s family? The issue comes to a point when he confronts his white half brother, who is fighting with the Confederates, on the battlefield.

What does he owe his country, and his race? It’s hardly as if racism itself has vanished: At night, Black and white Union soldiers gather around separate campfires.

He is ambushed by memories of home. “The line between master and familiar is sometimes a gummy thing,” he thinks. Yet he’s aware that “one day they become white and you, their property.”

Etheridge has a woman back home, Fanny. To his dismay, she shows up near where the fighting is occurring. Their love story is intense, chaste and entirely winning.

A New York Times reporter — he’s based on a real character as well — travels with the Union troops. He’s comic relief; after boasting that he wants to be where the fighting is, he runs like a rabbit when shots are fired. He narrates his reporting, mumbling inanities like “A Sabbath silence brooded over the mire.”

This is in some senses Faladé’s first novel. (He co-wrote a young-adult novel, “Away Running,” with Luc Bouchard.) There’s blood and sinew in the story he tells.

It seems built out of pine, not mahogany, as if heeding the poet A.R. Ammons’s advice: “Sometimes the best piece of / wood is not right for what you have in mind.”