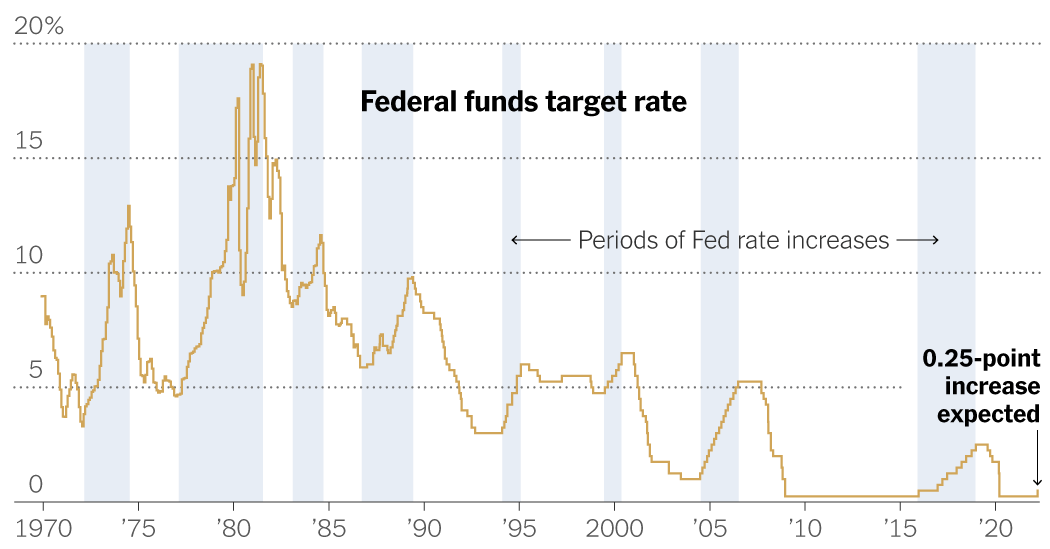 Prices for groceries, couches and rent are all climbing rapidly, and Federal Reserve officials have been warily eyeing that trend. On Wednesday, they are expected to take their biggest step yet toward counteracting it.

Central bank officials — who have been signaling for months that they are preparing to pull back economic support — are expected to raise their policy interest rate by a quarter percentage point. That small change will carry with it a major signal. Policymakers are telling markets and the public that they have fully pivoted to inflation-fighting mode and will do what is necessary to make sure price gains do not remain hot for months and years to come.

The Fed will release its decision at 2 p.m., and Jerome H. Powell, the central bank’s chair, will hold a news conference at 2:30 p.m.

The Fed is acting at a tense moment for many consumers, when people are worrying about rising day-to-day expenses and trying to think through what higher interest rates could mean for their finances. Here’s a rundown of what is happening, why it is happening and what it is likely to mean for markets and the economy.

The Fed is taking its foot off the accelerator.

The Fed is poised to increase the federal funds rate, a short-term borrowing cost for banks, in what officials have signaled will be the first of a steady series of moves. Fed policy changes trickle out through other types of interest rates — on mortgages, car loans and credit cards. Some of the interest rates that consumers pay to borrow money have already moved higher in anticipation of the Fed’s coming adjustments.

The Fed will preview just how many times it expects to increase borrowing costs in 2022 and 2023 in a fresh Summary of Economic Projections, a quarterly release that will come out alongside the March statement. Investors expect as many as seven rate increases this year, which would take the funds rate above 1.75 percent.

That’s because inflation is hot.

The policy changes come at a challenging moment for central bankers: They are in charge of maintaining price stability, and inflation is running at the fastest pace in four decades. While officials expect price gains to moderate this year, how quickly and how much that will happen are uncertain, especially as war in Ukraine pushes up fuel costs and fresh virus restrictions in China threaten to perpetuate supply chain disruptions.

The Fed is also in charge of fostering maximum employment, but with hiring rapid and more open jobs than there are available workers, that goal appears to have been achieved, at least for now.

Fed changes could also hurt stock and other asset prices.

The effects of higher rates might be visible in markets. Higher interest rates tend to eventually lower stock prices — in part because it costs businesses more to operate when money is expensive to borrow, and in part because Fed rate increases have a track record of touching off recessions, which are terrible for stocks. Pricier borrowing costs also tend to weigh on the value of other assets, like houses, as would-be buyers shy away from the market.

The Fed is also preparing to shrink its balance sheet of bond holdings, and many economists expect Fed officials to release a plan to do so as soon as May. That could push up longer-term rates and will probably further pull down stock, bond and house prices.

The goal here is a soft landing.

You might wonder why the Fed would want to slow down the economy and hurt the stock market. The central bank wants a strong economy, but sustainability is the name of the game: A little pain today could mean less pain tomorrow.

The Fed is trying to get inflation down to a more comfortable level — where price increases do not influence people’s spending choices or daily lives. Officials hope that if they can slow the economy enough to reduce inflation, without damaging it so much that it tips into a recession, they can set the stage for a long and steady expansion.

“I think it’s more likely than not that we can achieve what we call a soft landing,” Mr. Powell said during recent testimony before lawmakers.

The Fed has let the economy down easy before: In the early 1990s it raised rates without sending unemployment higher, and it appeared to be in the process of achieving a soft landing before the pandemic struck, having raised rates between 2015 and 2018.

But economists have warned that it could be a tough act to pull off this time around.

“I wouldn’t rule it out,” Donald Kohn, a former Fed vice chair, said of a soft landing. But he said a clampdown on demand that pushed unemployment higher was also possible.